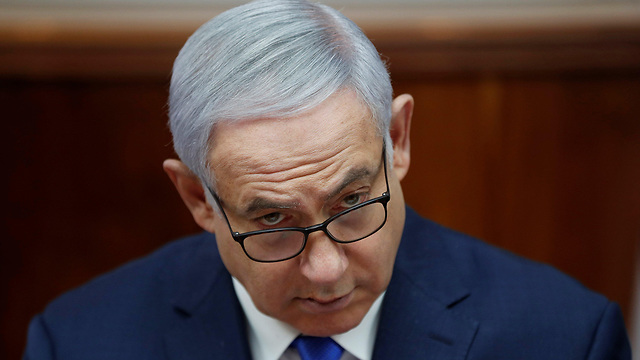 Netanyahu should resign for the good of the country

Opinion: Some might think it's unacceptable for a Yedioth Ahronoth writer to call on the prime minister to quit his post over corruption charges that directly involve my publisher; the differences, however, between the soon-to-be indicted Arnon Mozes and Netanyahu are immense.

For years I have defended Prime Minister Benjamin Netanyahu. He is not a monster. He is one of the most important statesmen to ever enter Israeli politics, and under his leadership the past decade has been one of the most fruitful for Israel. The economy is flourishing, the prophecies of Israel’s potential international isolation have been shattered, diplomatic ties with many countries—including those once considered hostile—are developing rapidly, and the special relations with the Russian president now has strategic significance.

Nevertheless, Netanyahu has been involved in some questionable deals in recent years. I'm not just talking about some gifted cigars. The accusations are far more serious, and although Netanyahu's supporters might argue there was nothing criminal, they can't deny that his quid-pro-quo behavior is corrupt. Worse still, Netanyahu's achievements can't overshadow the crises his actions are certain to create in the long term.

For instance, the deteriorating relations with the American Jewry, the concessions to the ultra-Orthodox (the long-term implications of which are incredibly destructive), the division and incitement he creates among Jews within Israel itself, the negative attitude he perpetuates towards Israeli Arabs and the inevitable reality of a binational state he is leading us toward.

Netanyahu also has justified complaints for the justice system. I, myself even wrote about them. All the faults of the judicial system, however, cannot disguise either the established facts nor the assessments about the prime minister's problematic conduct.

Attorney General Avichai Mandelblit’s recommendation to indict—written with extreme caution—leaves a bad aftertaste. Mandelblit, after all, used to be no less than Netanyahu's confidant. Yes, there was an oligarchy here, which still has an influence and ought to be criticized, but Netanyahu is making this situation much worse.The judicial system in the country is not perfect and its faults should be condemned and corrected. However, Netanyahu's vendettas against the judicial system and anyone who refuses to be his avid supporter could lead us to disaster.

Nonetheless, there are those who will say: “Those who live in glass houses shouldn’t throw stones,” because there is also a recommendation to indict the owner of the very outlet for which I am writing this piece. Although, it of course pains and disturbs me, there is still an enormous difference between the conduct of Netanyahu and that of Arnon Mozes, since the conversations that were recorded and exposed—where the prime minister asked for favorable coverage in return for regulatory benefits—are one thing, while running the newspaper is something else.

From the moment the news about the affair—now known as Case 2000—broke, the newspaper made sure to demonstrate that it could fight the allegations. Netanyahu forced his opinion on all the government ministers, all the senior members of his party and all the MKs. At Yedioth Ahronoth, however, the opposite was true. There was no coercion or censorship. Everyone was free to write whatever they wanted, including those calling on Mozes to suspend himself from running the paper until the allegations have been cleared. We are proud of the editorial freedom that we’d been given, and it’s the reason why Yedioth has a variety of opinions that you can’t encounter in any other Israeli publications.

Another difference is that Yedioth Ahronoth is a privately owned newspaper, while Netanyahu is a public figure, and all the resources under his control are also public. His ministers, like marionettes, would say one thing in private conversations and the complete opposite during media appearances. There is Netanyahu the statesman—with a series of worthy achievements under his belt—and there is Netanyahu the politician, who is willing to damage the national interests and may even lead us all to the brink of civil war for the sake of his own interests.

I didn’t vote for Netanyahu in the last election, but I supported him on many issues, even when it came to his battles with the legal system. Which is why I feel entitled to directly address him: This is an historic opportunity to do something important for the country you love, please don’t destroy what you’ve accomplished. And you’ve accomplished a lot!

We want to remember you as the statesman. Don’t drag us all into a battle in which there can be no winners. It’s still not too late for a deal that would see you resign in return for the closure of all your criminal cases. If the State of Israel appeals to you, then please answer, not only for you own good, but for the good of the country as well.