TEL AVIV - About 500 Palestinian prisoners were released Monday from Ketziot prison in the Negev, in the framework of goodwill gestures to Palestinian Authority Chairman Mahmoud Abbas.

The prisoners were transported by bus to five border crossings, one in the Gaza Strip and four in the West Bank.

Israel has pledged to release 900 prisoners in the coming months, with the first group of 500 released Monday. 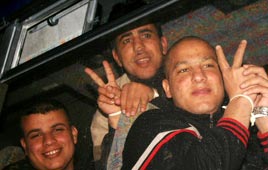 to refrain from terror activity after their release.

The IDF was on high alert in order to facilitate the smooth transfer of prisoners, with senior officers expected to be placed at all crossings.

The army also prepared an Israeli and international media presence at the crossing points.

Meanwhile, families of terror victims gathered at the Bitunia crossing in the West Bank to show their opposition to the release.

David Davidovich, who lost his daughter Ahuva three years ago in a Gaza Strip shooting, told Ynet he feels as if Palestinian prisoners receive money and gifts, while Israel's loved ones are buried in the ground.

"My daughter is buried in Gush Katif," he said. "I don't know how I'll react the day of the pullout."

"Ronen was on his way to Jerusalem with friends when the car got stuck," he said. "When I arrived to pick him up, they opened fire on us."

Landau said he decided to protest the release because his "son is buried while the prisoners are beginning their lives again."

Ruwayda Rubaya, one of the four female prisoners released, is married with two daughters. She was accused of transferring explosive devices for the Aqsa Martyrs Brigades and sentenced to two years imprisonment in 2002. Her sentence was reduced by six months.

"It was difficult knowing I couldn't be with my daughters," she said. "The occupation is responsible."

Meanwhile, as the busses pulled into the Erez crossing in the Gaza Strip, calls of praise and thanks to Abbas could be heard.

Samir Abu Madlal was among the families waiting at the Erez crossing. His brother Sohal had been sentenced to six-and-a-half years in 2001 for membership in the Fatah military wing.

"We are asking the Palestinian Authority to prioritize the prisoner release issue," he said. "We would have liked to see all the prisoners released."

None released with 'blood on their hands'

The list of prisoners slated for release was published on the Israel Prison Service website Wednesday. None of the detainees have "blood on their hands," but many were involved in shooting attacks, and some planned suicide attacks that were thwarted. Most of the prisoners have already served two thirds of their sentence. Earlier Sunday, the High Court of Justice rejected a petition by terror victims against the prisoner release. The judges ruled that their intervention in the matter was unwarranted.


פרסום ראשון: 02.20.05, 23:16
commentsend to friendshareshare
See all talkbacks Close all talkbacks
new comment
Next
Previous
Warning:
This will delete your current comment
cancelOk