1 wounded as attacks continue during brief

GOC Southern Command Major-General Tal Russo told reporters Thursday that of the seven Israeli victims killed in the multiple terror attack near Eilat, six were civilians and one was a soldier. The soldier, 22-year old Staff-Sergeant Moshe Naftali from the Golani Brigade, was killed by terrorist gunfire.

Another shooting incident was reported during the press conference, where Defense Minister Ehud Barak and IDF Chief of Staff Benny Gantz also spoke.

Full coverage of attacks in south:

A military source says fire was opened on a patrol searching for the terrorists who committed the deadly attacks in the south, wounding one.

Russo recounted the chain of events during the briefing, saying that three terrorists carrying explosive devices, weapons and grenades entered Israel from Sinai. 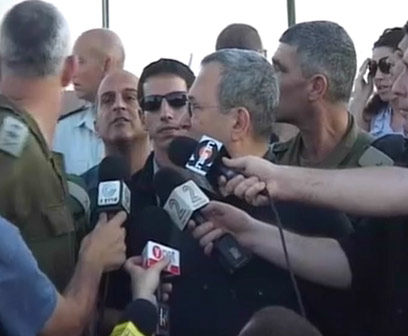 "They spread across 300-meter range and started shooting at the first bus," he said. "They shot at another car and another bus."

Later a suicide bomber detonated his explosives belt, and another terrorsit opened fire at IDF forces that arrive on the scene. According to Russo, two operatives were shot and killed over the border fence, and it appears that Egyptian forces killed two others on their territory.

"At this point the event has been seemed finished, but then we found explosives on the path," Russo said.

He added that one of the attacks took place near an Egyptian border checkpoint. "It appears the Egyptians hit two terrorists in their territory," Russo said.

In his briefing, Gantz addressed the bombing of a Rafah building said to be used by the Popular Resistance Committees. "We have operated in Gaza, in a location where we believe the attacks originated, and we will continue to operate in the rest of the area in order to ensure that residents of Eilat continue to live their lives in peace," he said.

Barak, in his speech, blamed the attack on lax security in Egypt since former President Hosni Mubarak's downfall. "The Egyptian grip is loosening and this is the reason for this attack, which apparently originated in Gaza," he said.

"Unfortunately it is not always possible to prevent such attacks, but the IDF is already hitting the heads of the committees in Gaza and if need be the strikes will be exacerbated. We must understand – there are more aims to terror, more determination to continue to attack us."

"Following the terror in the south, please note that a grave travel warning is still in effect on Sinai," the bureau stated.

The US condemned the attack. "We condemn the brutal terrorist attacks in southern Israel today in the strongest terms. Our deepest condolences go to the victims, their families and loved ones, and we wish those injured a speedy recovery. The US and Israel stand united against terror and we hope that those behind this attack will be brought to justice swiftly," a State Department spokesman told Ynet.