'Your spirit shines on us all'
Photo: Moshe Milner, GPO

Prime Minister Benjamin Netanyahu vowed Friday that Israel would retaliate with force to Thursday's terror attacks. "This was just an initial response," he told soldiers wounded in the attacks.

Netanyahu, who visited the soldiers at Soroka Hospital in Beersheba, commended them for their quick response to the attacks.

Escalation of violence in south:

"We have killed the heads of the organization that sent the terrorists," he said, adding, "We have a policy of exacting a heavy price from those who harm us and this policy is being implemented on the ground."

The prime minister said Israel had had a few years of relative calm. "Yesterday there was an attempt at escalating violence," he said. "We have two responses to this threat – defense from the sky and defense from the ground, specifically the fence I have ordered built. We will expedite its construction." 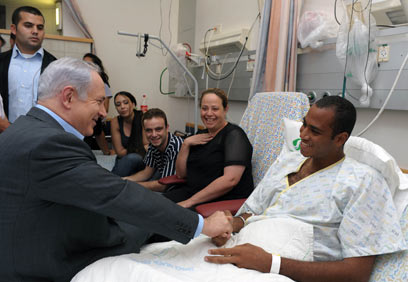 Netanyahu also spoke to Beersheba Mayor Rubik Danilovitch and Miki Sherf, the director of Soroka Hospital, and commended the city and its medical team for their swift action.

"I am impressed by your spirit, which shines on us all, and it will help us deal with this threat," he said.

During Netanyahu's visits terrorists fired a number of rockets on Israel's south, hitting a number of different locations, including Ashdod. No injuries or damage were reported.