US intelligence reports show that a new al-Qaeda linked group may have perpetrated the terror attacks that killed eight Israelis near Eilat on Thursday, the Washington Times reported, citing intelligence and counterterrorism officials.

Monday's report says a US government assessment has concluded that the terror groups that may have been responsible for the attacks are the Popular Resistance Committees, which Israel has accused, Jaish al-Islam, or a new group affiliated with al-Qaeda based in Sinai.

The Times quotes Dore Gold, former Israeli ambassador to the UN and current president of the Jerusalem Center for Public Affairs, as saying, “There has been a history of close operational coordination between Hamas, the Popular Resistance Committees and Jaish al-Islam, which is the most important of the al-Qaeda affiliates in the Gaza Strip.

“There have been al-Qaeda affiliates that have gotten into an exchange of fire with Hamas that were not Jaish al-Islam, though. These organizations all work together, and Sinai is a place where they all meet.” 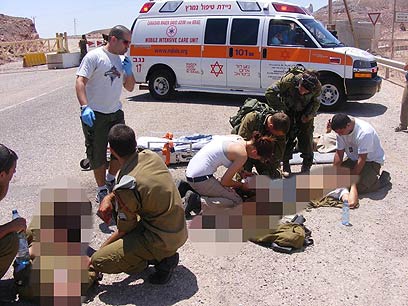 A US intelligence official told the Times intelligence reports point to al-Qaeda, though there has been no confirmation for any of the assessments.

Another official was quoted as saying that the new al-Qaeda linked group, also suspected of numerous assaults on Egypt's gas pipeline to Israel, was responsible for actually carrying out the attack – which was perpetrated by up to two dozen terrorists – while the PRC simply provided intelligence on possible locations. 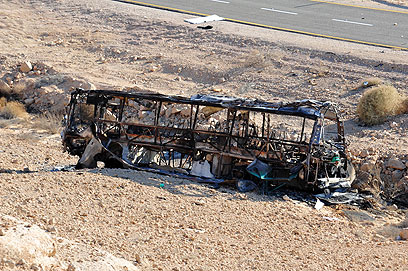 Egged bus attacked in south (Photo: Ariel Hermoni, Defense Ministry)
"PRC was clearly involved, (but) they were not the brains or the brawn of the operation. They were the scouts,” the official was quoted as saying. “Because the PRC squawked after the operation, they became an immediate target. It is not an unjustifiable reaction.” A counterterrorism official told the paper that al-Qaeda's leadership probably had nothing to do with the attack. Salafi extremists were trying to "link themselves to al-Qaeda and use that brand name", he said. The new group in Sinai is also believed to have received a boost by Egypt's release of some 200-300 security prisoners this year.

In July a group calling itself al-Qaeda in the Sinai Peninsula attacked the el-Arish police station, alerting intelligence officials to the presence of the terror empire in the area. The group's success, the report says, is what prompted Egypt to launch Operation Eagle, which increased military presence in Sinai significantly, a move which Israel approved.