Attacker steals taxi in south Tel Aviv, drives into police checkpoint securing street near popular nightclub and then gets out of car and stabs passers-by; one person seriously injured in attack; perpetrator arrested

A Palestinian attacker wounded eight Israelis near a Tel Aviv nightclub early Monday, slamming into a police checkpoint with a stolen taxi and then stabbing others, police said.

The attacker was a Palestinian in his twenties from the city of Nablus, according to police spokeswoman Luba Samri.

Just before 2 a.m., the attacker stole a taxi in south Tel Aviv and then drove into a police checkpoint securing the street near a popular nightclub, she said.

He then got out of the car and stabbed passers-by, she said, while shouting "Allahu akbar" - Arabic for "God is great," a phrase often used as a battle-cry by Islamic terrorists.

One of the eight people hurt was listed in a serious condition in hospital and the others suffered light to moderate injuries, Samri said.

The Palestinian told police that he had planned the attack in advance and chose the 'Haoman 17' nightclub, where over 1,000 revelers celebrated the end of the summer vacation. He also bought the knife and carefully planned the taxi attack. Only the police's presence, he claimed, disrupted his plans. 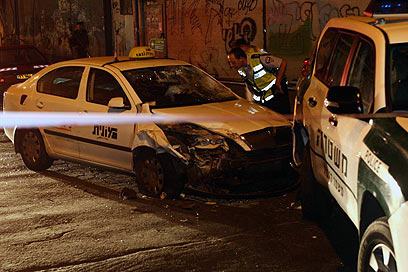 The police and Shin Bet continued to question the attacker, who was briefly hospitalized at the Wolfson Medical Center in Holon. The security forces are trying to find out if others were involved in the attack.

The initial inquiry showed that the perpetrator spent at least one day in Tel Aviv, where he learned of the teen party scheduled for Sunday night at 'Haoman 17.'

"No caries out a hit-and-run attack at that time of the night," a police source told Tel Aviv.

The police were trying to retrace the terrorist's steps and contact people with whom he was in touch. They also planned to question the attacker over the course of his actions, from the moment he purchased the knife to the moment he used it. In the initial stage of the questioning he claimed that he planned the terror act all on his own.

'People lay on the street, wounded'

The perpetrator managed to stab several individuals before he was restrained by police. He was lightly injured in the scuffle.

Aharon Yampel, an Ihud-Hatzalah volunteer told Ynet, "When we arrived at the scene we saw several people hurt as they lay on the street with stab wounds. Others suffered injuries after they were hit by a car. We provided initial medical treatment at the scene until ambulances evacuated them to hospital."

Elad, another eyewitness, recalled, "We suddenly heard a large boom. I saw the taxi slamming into another car and then a man came out and shouted 'Allahu akbar'. He stabbed some people. There was yelling and a lot of noise until a police unit arrived and restrained him." 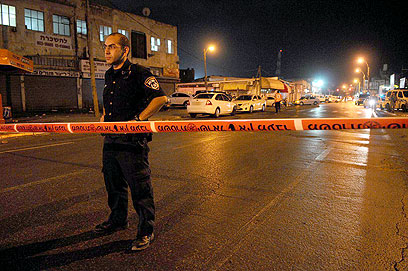 Another witness by the name of Daniel said, "We were outside the club after they didn’t let us in. We saw a car that slammed into another car. It was scary. If it weren’t for the checkpoint, he would have made it straight to us. It's a miracle. We had only gone out to have some fun."

The cab driver whose car was stolen by the Palestinian also arrived at the scene and was questioned by police. "I picked him up in the Jaffa area. He asked to go to the central bus station. When we arrived he suddenly pulled out a knife and stabbed me in the hand. He tossed me out of the vehicle and continued driving."

According to the driver, at one point the Palestinian said, "I only want your car," but then pulled out the knife. "I struggled with him but he managed to stab me."

Tel Aviv police chief Aaron Aksol said, "There is no doubt that the border police checkpoint prevented a much graver catastrophe. Our preparedness following terrorist warnings has proven itself."

Israel police chief Yohanan Danino also arrived at the scene of the attack and praised the border police preparedness. He explained that police forces were on alert ahead of the end of Ramadan and that's why the checkpoint was set up near the nightclub.