VIDEO - Syrian security forces killed seven people on Tuesday as they opened fire to disperse thousands of protesters rallying against the regime on the first day of a Muslim holiday that marks the end of the fasting month of Ramadan, activists said.

The activists said security forces fired at protesters in the southern province of Daraa, in the central city of Homs and in Damascus and its suburbs following morning prayers on the start of Eid al-Fitr, a three-day holiday.

"Eid is when the regime goes," read a banner held up by protesters in the city of Daraa, where the uprising against President Bashar Assad's autocratic regime erupted five months ago.

Amateur videos posted by activists online showed fired-up protesters calling for the downfall of the regime and execution of the president. Some called for international protection of Syrian civilians. "We are being killed every day," read another banner.

The Local Coordination Committees activist network said six protesters were killed in Daraa province and one in Homs. An activist in Daraa confirmed the six deaths in Daraa, saying four were killed in the village of al-Harra and two others in Inkhil.

The deaths in al-Harra included a 13-year-old boy, they said. "They can shoot and kill as much as they want, we will not stop calling for regime change," the activist said. He spoke on condition of anonymity for fear of reprisals.

The London-based Syrian Observatory for Human Rights also reported heavy gunfire in the Qaboun district of the capital Damascus resulting in five injuries.

State-run news agency SANA said Assad performed Eid prayers in the Hafez Assad Mosque in the capital, named after Assad's father who ruled Syria with an iron fist for three decades until his death in 2000. 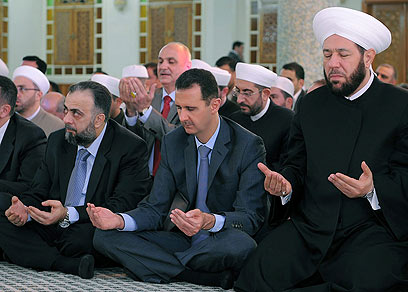 Pious Muslims traditionally visit cemeteries to pray for the dead on the first day of the Eid, and children get new clothes, shoes, haircuts and toys for the holiday.

On Tuesday, many in Syria visited graves of loved ones who have been killed in the five-month uprising against President Bashar Assad.

In the northern province of Idlib, a few hundred protesters marched with flower wreaths decorated with the Syrian flag and pictures of dead relatives and shouting: "Bashar, we don't want you."

Human rights groups say Assad's forces have killed more than 2,000 civilians since the uprising erupted in March, touched off by the wave of revolutions sweeping the Arab world.

The government crackdown escalated dramatically at the start of Ramadan, a time of introspection and piety characterized by a dawn-to-dusk fast. Muslims typically gather in mosques during the month for special nightly prayers after breaking the fast, and the Assad government used deadly force to prevent such large gatherings from turning into more anti-government protests.

The LCC activist network said Syrians were keeping their Eid celebrations to a minimum this year in solidarity with the Syrians who have died and the families of detainees.

"There will be no happiness while the martyrs' blood is still warm", it said in a statement Tuesday.

The Syrian government has placed severe restrictions on the media and expelled foreign reporters, making it nearly impossible to independently verify witness accounts.