Many Israeli agricultural products have been recently targeted by the Israel boycott campaign: tomatoes, peppers, citrus fruit, carrots, melons, strawberries and celery. But the flowers have been the primary obsession of the divestment movement, which wants to strangle the Israeli economy.

Agrexco, Israel’s leading flower exporter, has recently declared bankruptcy, partially due to the global boycott of its produce, according to some reports. More than 20 organizations in Europe in 13 countries endorsed a boycott of Agrexco.

International pressure, boycotts and sanctions on South Africa’s apartheid government played a major role in ending its power. Modeled on that global campaign, the anti-Israel boycott movement has notched notable victories of late, while making use of an old Marxist lexicon (“imperialism,” “colonialism,” “occupation,” and “settler society”). 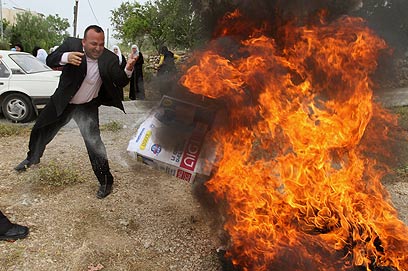 The first symbol of the anti-Israel economic campaign, Caterpillar, was far removed from the Western public consciousness. Yet Israeli roses were a better Jewish scapegoat, as flowers are a pillar of Israel’s economy (in the 1980s Israel became the world’s number two flower exporter. Agrexco was boycotted because it’s partially owned by the Israeli government and because the company has some farms in the Jordan Valley and in Tekoa, a settlement at the gates of the Judean desert.

Last year, Norway’s oil fund withdrew its investment from Africa-Israel and Danya Cebus citing their involvement in “settlement construction.” Just recently, the Swedish Coop has decided to terminate all purchases of Soda Stream carbonation devices. Meanwhile, the Methodist Church had passed an “anti-Israel” motion demanding a boycott of goods from “illegal” settlements. Quakers in Britain have also agreed to boycott Israeli products.

Elsewhere, major Dutch pension fund Pensioenfonds Zorg en Welzijn, which has investments totaling 97 billion euros, has divested from almost all the Israeli companies in its portfolio (banks, telecommunication companies, construction companies and Elbit Systems.) A large Swedish pension fund also divested from Elbit over the latter’s role in building Israel’s West Bank security fence. Meanwhile, the Ethical Council of four Swedish buffer pension funds urged Motorola “to pull out of the Israeli-occupied territories in the West Bank” or face divestment. On the cultural front, a film festival in Scotland returned funding to the Israeli Embassy after succumbing to boycott activists who threatened to picket the event. Elsewhere, some major Indian artists have announced the boycott of a show scheduled at the Tel Aviv State Museum in the spring of 2012. Dozens of music stars also endorsed the boycott this past year (Elvis Costello, Gil Scott-Heron, Roger Waters).

And there’s more: A major boycott is going to be approved soon at the Park Slope Food Coop, a renowned cooperative in Brooklyn, affecting Israeli paprika, bath salts, vegan marshmallows and the Soda Stream seltzer machine. Norway’s governmental pension and Germany’s Deutsche Bank divested from Elbit. The flagship London outlet of beauty company Ahava has been closed after years of protest. A Scottish council recently banned Israeli books from its public libraries. Eden Springs, the major Israeli water company, will not have its contract renewed by the famous London School of Economics.

The Hudson’s Bay Company, the oldest commercial corporation in North America, also discontinued sales of Ahava. Although this decision was made for “commercial reasons”, it coincided with an aggressive campaign by several groups advocating a boycott of Ahava. Most of the Western universities are now infested with a virulent anti-Jewish mood. Students at Edinburgh University just voted in favor of a boycott of Israel. The University of Johannesburg has cut its links with Beersheba’s Ben-Gurion University. DePaul University’s Student Association approved a boycott of Sabra hummus. The French University of Aix en Provence cancelled a meeting with Israeli writer Esther Orner after a boycott by Arab authors. Alan Dershowitz recently charged that Norwegian universities are conducting “an implicit boycott of Israel.” Several companies, primarily Swedish firm Assa Abloy, which runs Mul-T-Lock, and the partly Dutch-owned Wine Cellars, have pulled out of the Barkan industrial area, near the Israeli city of Ariel. The Spanish government disqualified Ariel University Center of Samaria from competing in the finals of the international contest between university architecture departments to build a self-sufficient house using solar power. The Norwegian EL & IT union, which represents thousands energy and telecommunications workers, has adopted a boycott of the Histadrut labor union federation. Brazil’s largest trade union voted for the boycott and called for the suspension of Israeli-Brazilian economic agreements and military ties. French firm Veolia, which operated the light rail project in Jerusalem, sold its shares in the project. Deutsche Bahn just withdrew from the same project, with German transport Minister Peter Ramsauer offeringthe following reason for terminating the project: “Palestinian Foreign affairs Minister Riyad al-Malki, members of the German Parliament and media have criticized a project in which DB international is acting as adviser to Israel’s state-run railway.” Italian company Pizzarotti is now under pressure for the same train project. When Italian stores last year announced the banning of Agrexco, the company’s director, Shimon Alchasov, rhetorically asked me: “Should I mark the products with a yellow star of David?” The late, great historian Raul Hilberg explained that the economic strangling of the Jews in business, education and employment was the first step in the Holocaust. Now the same “Raus mit Uns” (out with us) boycott is bleeding the State of Israel. Giulio Meotti, a journalist with Il Foglio, is the author of the book A New Shoah: The Untold Story of Israel's Victims of Terrorism