Protestors with poster of child tortured in Syria
Photo: Reuters

Human rights group: At least 88 people believed to have died in detention between April and mid-August. At least 52 of them apparently suffered some form of torture that was likely to have contributed to their death

Deaths in prisons and police detention in Syria have soared in recent months as President Bashar al-Assad's government tries to crush protests against his rule, Amnesty International said on Tuesday.

The London-based human rights group said it had details of at least 88 people believed to have died in detention between April and mid-August. At least 52 of them had apparently suffered some form of torture that was likely to have contributed to their death.

This was a huge increase in abuse over that previously reported in the country, Amnesty said. Before the uprising, its researchers typically recorded around five deaths per year in custody.

"The deaths behind bars are reaching massive proportions and appear to be an extension of the same brutal disdain for life that we are seeing daily on the streets of Syria," said Neil Sammonds, Amnesty International's researcher on Syria. "The accounts of torture we have received are horrific. We believe the Syrian government to be systematically persecuting its own people on a massive scale."

Witnesses say Assad's government has deployed troops and tanks against demonstrators and besieged many of its own towns in an attempt to regain control.

Amnesty says it has compiled the names of more than 1,800 people reported to have died since the protests began in April. Thousands of others have been arrested, it said, and many of them held incommunicado. 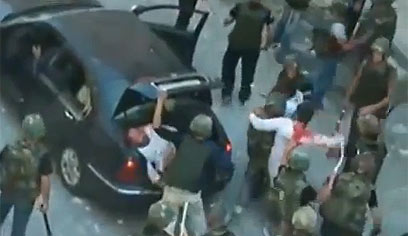 The group said its researchers had reviewed video clips in 45 cases of those found killed, or with injuries on many of the corpses, indicating they had suffered beatings, burns, whipping, electric shocks and other abuse.

Amnesty said its report strengthened its case for Syria to be referred to the International Criminal Court, and for an arms embargo and tighter asset freezes and financial sanctions to be declared against senior members of the government.

"Taken in the context of the widespread and systematic violations in Syria, we believe that these deaths in custody may include crimes against humanity," said Sammonds.

"The response from the Security Council has been utterly inadequate so far, but it is not too late for them to take firm and legally binding action."