In praise of Torah studies

Op-ed: Yeshiva graduates fit for many jobs, but does Israel really want them in job market?

I’ll open with a story about an acquaintance: Akiva Moshe Lieberman, a 38-year-old Hassidic Jew from Ashdod. He is as religious as it gets: A father of five and a graduate of advanced Torah studies. For years he studied at yeshivas and later at an advanced seminary. In his late 20s, he embarked on evening studies at a haredi center for professional training in his town of residence, and after completing basic training as a practical engineer in the field of computers he was hired by Alta, a subsidiary of the Israel Aircraft Industries.
Equal Rights
AG reverses gender-biased student elections clause
Aviad Glickman
Yehuda Weinstein intervenes in haredi college's student union elections due to gender-based code that leaves women out of race
AG reverses gender-biased student elections clause
The cool reception he received did not cool off his zeal and desire to succeed. “We don’t have much that we can do with you,” they told him. He was placed in a team where the manager was preoccupied with a military operation and was unable to object to the new “religious guy” joining his department. In those days, the company was contending with new software purchased in Britain for millions of dollars but was unable to synchronize it to the local needs. All the experts who worked on this project gave up. Yet my acquaintance took on this problem, analyzed it in depth, and after a few months succeeded where all other experts failed. 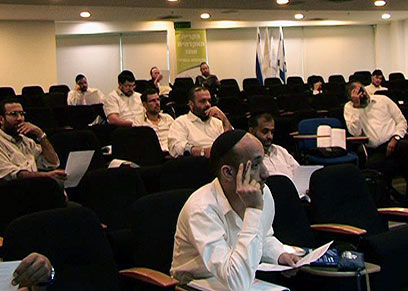 Haredi college campus (Photo: Avi Chai)
Six months after joining the company he won the CEO’s Prize for Entrepreneurship – a rare honor for one with barely any industry experience. Since then he won seven more prizes for improvements he introduced. About a year and a half ago he received Alta’s distinguished employee award, and later was awarded as distinguished employee in all of Israel’s defense industries, which employ some 14,000 people.

Moshe, as he’s known at Alta, is not unique. There are thousands like him who graduated Torah studies, integrated in various places of work and are doing extremely well there. One of them, a good friend of mine, is the graduate of an advanced seminary who resides in Bnei Brak. His tax payments for the last two years totaled NIS 11 million (roughly $3.5 million).

The attempts by some members of the tent protest to blame the ultra-Orthodox public for the country’s state of affairs are baseless. The efforts to impose studies that this community does not wish to engage in will not work; moreover, on the practical level there is almost no connection between general education studies and the ability to join the workforce. I don’t know many people who in the framework of their job solve equations with five unknowns, and many employees are not employed in their field of study anyway. However, studies in essence constitute a means for sharpening one’s mind and ability to integrate into the workforce – regardless of whether these are Torah studies or studies in any other field (with the addition of complementary studies required for the job.) The reality whereby any educational subject matter – including the history of Hara-kiri in Japan – is recognized in Israel as academic education, yet only advanced Torah studies are not recognized is a disgrace that shows we are not really wanted in the job market. Had they wanted us, haredim, in the job market, officials would change the current situation, just like they would change the situation whereby those whose military service was postponed for religious reasons are not allowed to work.

At times it appears that those who fear the change are a handful of politicians and men of letters, who are concerned that following the hoped for change they will have nobody to slam.