While Israel's representative in the Palmer Committee adopted the UN report on the 2010 flotilla raid, Turkey's envoy chose to reject many parts of the document that are not to Ankara's liking.

In an appendix to the document, Turkey's Ozdem Sanberk rejected the Palmer Report's conclusions on the following issues: The question of the legality of the blockade imposed on Gaza by Israel; the actions of the flotilla; and naval blockades in general.

"The wording in the report is not satisfactory in describing the actual extent of the atrocities that the victims have been subjected to," the Turkish representative wrote in an appendix. "This includes the scope of the maltreatment suffered by the passengers in the hands of Israeli soldiers and officials."

After expanding on Ankara's various objections, Sanberk wrote: "I reject and dissociate myself from the relevant parts and paragraphs of the report," proceeding to cite a long list of the document's clauses and findings.

As opposed to Turkey, Israel's representative to the committee, Joseph Ciechanover, adopted the UN probe. 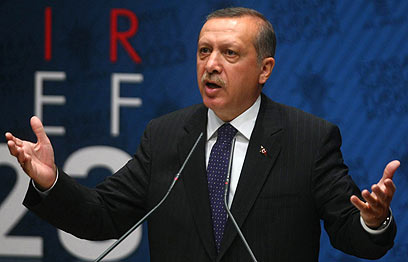 "Israel appreciates the important work of the Panel," the Israeli envoy wrote, adding that while Jerusalem has some reservations, it nonetheless appreciates "that the report concurs with Israel’s view" on a long lists of issues.

However, he noted that "Israel does not concur with the Panel’s characterization of Israel’s decision to board the vessels in the manner it did as 'excessive and unreasonable.'

Ciechanover chose to end his response to the report's findings by lauding the shared history of Jews and Turks.

"Israel cherishes the shared history and centuries old ties of strong friendship and cooperation between the Jewish and Turkish peoples and hopes that the Panel's work over the past few months will assist Israel and Turkey in finding a path back to cooperation," he wrote.