The family of Samir Balbisi, an east Jerusalem taxi driver murdered by alleged "Jewish terrorist" Yaakov Teitel, has petitioned the Attorney General to recognize the family of Amiel Ortiz, a teen who was critically wounded by a bomb believed to have been planted by Teitel, as terror victims.

Both families sued the National Insurance Institute for the benefits that come with terror victim status, but only the Balbisi family was deemed eligible. The Balbisis received only one year's worth of retroactive benefits, even though the attack took place in 1997.

"It is unacceptable for the State of Israel to discriminate against the Ortiz family, whose son almost died at the hands of the same murderer who killed our son, and decide that they are not eligible for financial assistance from the State," the petition read. 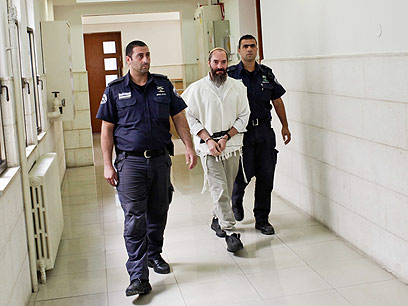 Yaakov Teitel at court Sunday (Photo: Noam Moskowitz)
"We were all hurt by one person, it's unacceptable that we were recognized as terror victims, and the Ortiz family wasn't," Akram Balbisi, Samir Balbisi's father, told Ynet. "I come to every hearing to see Teitel and look him in the eye. He should be tried, but he pretends to be crazy. After 15 years, what can I say to him? He can't bring my son back."

The family also asked the State to pay the benefits it should have received retroactively from the date of the murder. The two families recently won a punitive damages claim against Teitel, worth NIS 4 million ($1.1 million).

Amiel Ortiz, 18, was critically injured when a bomb Teitel placed in a holiday present detonated in 2009. Teitel was also charged with a series of other violent hate crimes. "It's absurd that we weren't recognized as terror victims, we were shocked," David and Leah Ortiz, Amiel's parents, said. "We are happy at least that (the Balbisis) received something, but it's a shame that they only received one year's worth of retroactive funds."

Teitel's trial continued on Sunday, dealing with the question of whether he is fit to stand trial. His attorneys claim that he isn't, even though a district psychiatrist asserted that he is.