Iranian police have started cracking down on water fights springing up across the country with the arrests of several young men and women who took part in the latest organized water pistol battles.

A water fight in a Tehran park on Friday, thought to have been organized through social media websites, was broken up by police who arrested several of the revelers, the semi-official Mehr news agency reported on Sunday.

"Some of these by police on Friday," Ahmadreza Radan, Tehran's deputy police chief, told Mehr.

Mingling between sexes outside marriage is banned in Iran and conservatives in the Islamic Republic have been scandalized by scenes of dozens of youngsters spraying each other with water in public. 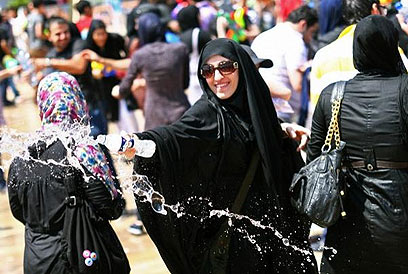 'Rebels who intended to play water fight were arrested'

Various websites have posted photographs of girls and boys in wet clothes throwing water balloons, firing water guns and splashing each other with water from bottles after the first water fights were reported in the capital a few weeks ago.

The fights have since spread across the country despite warnings from authorities.

They are seen as the by Iranians against Islamic norms which require women to cover their hair in public and wear loose-fitting clothes, and where much Western entertainment is banned due to what is considered law morality. 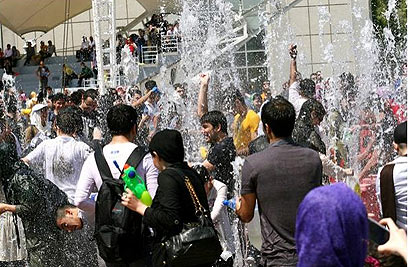 Conservatives say the water fights must be stamped out to prevent what they say is the corruption of Iranian youths, much of which is blamed on a deliberate "soft war" by the West conducted through TV, films and pop music.

News website Khabar Online said police in the southern city of Shiraz arrested a man they said was organizing water fights though social networking site Facebook, which has been blocked by a government Internet filter but which many Iranians manage to access.

Six women and 11 men were arrested at a water fight earlier last month in the Gulf port of Bandar Abbas but released after 24 hours, Mehr reported.

"We have announced earlier that water fights and breaking the norms are forbidden... and the police will not tolerate that," Radan said.

"There are other aims behind this play... These people have committed very ugly and immoral acts."