Labor party heads to the polls

Nine months after Ehud Barak left the Labor party and took with him five of its 13 Knesset seats, the diminishing party's constituents will elect a new chairman or perhaps chairwoman on Monday. The race is considered close and betting on a likely winner proves a difficult task.

Mitzna was the first to show up at the polls in Haifa on Monday morning, and said that the "interest in these elections proves that (Labor) is still a governing party." Addressing concerns over the fact that he had not participated in national politics over the past six years, he said that he had spent that time "in the social forefront of the State of Israel."

"No one understands better than me the gaps that exist within the Israeli society, between the Carmel and Yeruham," he said. "It is not a 200 km distance, they are light years apart."

Yachimovitch, who voted in Tel Aviv, was greeted by her supporters, some of whom chanted encouraging slogans.

"I'm excited," she told Ynet. "It's an important day, when each Labor constituent must exercise his democratic right to come out and vote."

She said that Monday's race comes down to two candidates. "Everyone knows that ultimately, it's between Peretz and me, because Buji (Herzog) and Mitzna don't stand a chance to make it to the second round," she said. "I intend to win, and hope that it will happen today, but if it doesn't, it will happen in 10 days." MK Peretz arrived at the voting station in Sderot accompanied by his wife and supporters. The sheer number of signs scattered around town made it seem as though the entire constituency was voting for him.

"Over the past six months, we have reached populations that no one had hugged or touched for a long time," he said. "Turns out, people are waiting to feel that a public official is working for them, and I thought that it's important. Contrary to the perception that there is a strong coalition, I see many people who are waiting for an alternative to the government."

Peretz said that he is committed to wining the Labor party at least 10 mandates under his leadership. He promised not to return to a defense minister role, but rather to become the finance minister. "I will take action to give the people the sense that there is someone that thinks about them."

Herzog said before casting his ballot that he has visited dozens of voting stations throughout the day and was amazed at the support. He predicted the battle to be close, but added that he is going to be "these elections' big surprise. We are strong, the support for me is growing." He attributed the support to the backing of Histadrut Chairman Ofer Eini and Erel Margalit. "I am going to win, and it's no spin, my brother," he told Ynet at a Tel Aviv voting station.

In recent days, the candidates took turns attacking one another, with each trying to convey the same message: "Vote for me, only I can win." In the last two days, each camp spread countless rumors about how voters were abandoning their competitors and joining them.

Until the late hours of Sunday, the candidates still tried to motivate their activists ahead of election day in light of the uncertainty in the party.

The logistics of each camp on election day will play a major role in the outcome. Peretz is considered the most experienced candidate in this field, especially since these primaries are his third. The ballots will close at 10 p.m. with initial results coming in around midnight. Official results are not expected before Tuesday morning. 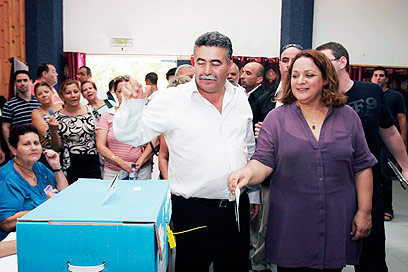 If national elections were to be held today, Labor would capture about 10 of the parliament's 120 seats, polls show. After a painful split this year, the internal power struggles have contributed heavily to its long decline continue.

"This is a race about a party that is marching toward irrelevancy," said Reuven Hazan, a professor of political science at the Hebrew University in Jerusalem. "The goal of whoever wins is to keep the party alive, not to lead it toward leadership or even a significant impact on the political agenda."

Who can reach 40% in the first round?

However, all three other candidates also claim that they have managed to set up strong apparatuses on the ground, which will be run by numerous volunteers during the 12 hours of voting.

Another significant factor is the number of constituents each candidate managed to recruit during the campaign. All four claim to hold a majority of the 65,000 Labor party members. 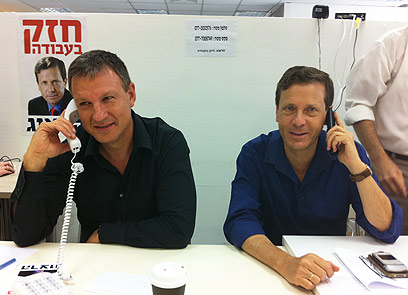 A third factor is how the Arab sector will vote. The Arabs and Bedouins, with 20,000 constituents, have had a major effect on the party for decades. They tend to promise their support to several candidates and their voting percentage is high.

The big question is whether one of the candidates can secure victory in the first round. If neither one reaches 40%, the two candidates with the best results will face each other in a second round.

Both Peretz and Yachimovitch claim that they can reach those numbers, while Hertzog and Mitzna both said that they would be the ones who would make it to the second round, where they will face Peretz or Yachimovitch.