Scene to be repeated in Jordan?
Photo: AP

Organizers have already announced that the protesters will try to break through the fortified embassy building and take down the Israeli flag.

A special Facebook page created Saturday is calling on Jordanians to attend the Thursday protest. Thus far, some 1,000 people have confirmed their attendance. 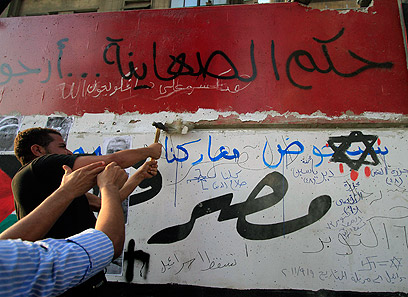 Israel is aware of the protest and senior officials have discussed the matter with their Jordanian counterparts in recent days.

Jordan's security forces have boosted security around the embassy compound. "Our interlocutors in Jordan are aware of the sensitivities," an Israeli official said Sunday. "We hope they will find a way to prevent violence against Israeli diplomats in Jordan."

Israel's Foreign Ministry has declared a heightened state of alert in embassies around the world following the storming of the embassy in Cairo over the weekend. It is feared that anti-Israeli forces will try to recreate Saturday's events.

Meanwhile, more evidence on the drama in Cairo emerged Monday as the Foreign Ministry continues to investigate the matter. According to Yedioth Ahornoth, Israel and the Egyptian authorities discussed the possibility of rescuing the security guards stranded inside the embassy by helicopter, but the plan was scrapped when it became clear there was no way to reach the roof.

Also, it was revealed that the Egyptian commandos could only enter the building via the air-conditioning vents.

Prior to the commandos' arrival, Shin Bet Chief Yoram Cohen instructed the guards to don yellow hats to help the Egyptians to identify them, but it was then suggested by the Egyptians that they wear traditional Arab headdress and Muslim garments instead to prevent the mob from detecting them.

On Sunday, Prime Minister Benjamin Netanyahu and Defense Minister Ehud Barak met with the head of the security staff in the embassy, Yonatan.

"There were moments we thought we wouldn't make it out of there," Yonatan told Netanyahu and Barak. "But we were very level-headed and acted composedly."

Netanyahu told Yonatan: "You prevented a great disaster. We were willing to move mountains to get you home but we needed your support from inside. Had you made a mistake, a catastrophe could have occurred."