Former US president says move an alternative to current deadlock and stalemate; believes Israel-Egypt peace treaty not in danger

Former US President Jimmy Carter said Tuesday he supports the Palestinian bid for statehood at the United Nations this month, despite White House concerns for the region.

The Georgia Democrat said he wouldn't be in favor of Palestinian President Mahmoud Abbas' bid to win UN recognition if President Barack Obama's administration had "put forward any sort of comprehensive peace proposal." But he said Palestinians have few other options but to seek statehood since no deal is in the works.

"As an alternative to a deadlock and a stalemate now, we reluctantly support the Palestinian move for recognition," he told a town hall event at the Carter Center in Atlanta. 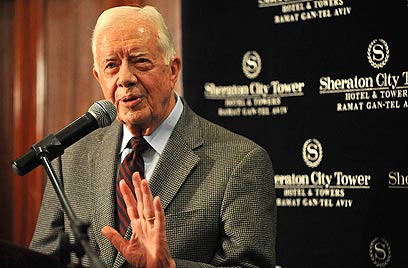 In Washington, Secretary of State Hillary Clinton said Tuesday she was sending top aides to Israel and the Palestinian territories to try to sway the Palestinians to drop their UN effort and bring the parties back to long-stalled talks.

Although the path to full membership seems blocked because the US promises to veto the bid in the Security Council, Palestinians hope for benefits that have eluded them for decades.

Carter said Tuesday it would be a "real step forward" even if a nonmember Palestinian state were recognized.

According to Carter, he doesn't believe the peace accord between Israel and Egypt is in any danger, voicing optimism for the future.

"The Arab spring has brought hope for democracy and freedom to many of the people in the region ... and I hope that eventually it will potentially bring about a change in the prospects of a peace agreement to be negotiated between Israel and its neighbors," he said.

"But it would require Israel to withdraw from the occupied territories and that's something that so far the Israeli government has been unable to do."