Couple's admission request was denied on grounds of 'social incompatibility'; say 'Arabs in the State of Israel have a right to live in Jewish communities'

Israeli-Arab couple Ahmad and Fatna Zabidat celebrated on Tuesday night the High Court of Justice's decision permitting them to live in the Jewish town of Rakefet after the community's admissions committee had rejected their application.

"Arabs in the State of Israel have a right to live in Jewish communities. We respect everyone regardless of their religion," they said.

The couple, whose admission request was denied on the grounds of "social incompatibility", filed the petition four years ago. On Tuesday, when news broke out of their victory, Jewish residents of Rakefet who supported them picked up the phone to offer their congratulations. 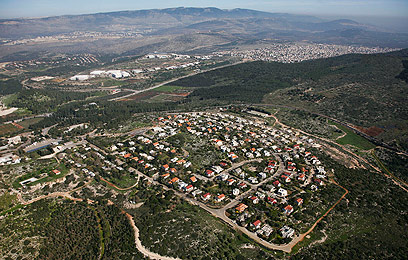 "Every move is difficult but we have no problem living in a Jewish community. We will be able to handle life in Rakefet," they added.

According to the couple, "We wanted to live in a quiet, developed place. We were surprised that they didn’t accept us but we didn’t give up and turned to the courts."

In Rakefet, the court's decision resulted in mixed reactions. "We are law-abiding citizens and we will implement the ruling," said the town's chairman Tzvika Friedman.

Another resident came out against the admissions committee's decision. "The committee's policy in the first place was wrong and undemocratic. This is state land. Jewish values stress that even a stranger must be treated with kid gloves.

"My opinion may be a minority in the community because residents here are concerned that more minority members would come live here," he said.

In June, the High Court ordered the state to explain why it was not considering the law allowing small communities to have admission committees illegal.

The bill permitting admission committees – able to prohibit applicants from residing in towns that establish them – was approved in March, but human rights groups petitioned the court over its acceptance, claiming it was racist and aimed at preventing Arabs from purchasing homes in Jewish communities.

According to the new law, communities are allowed to reject applicants based on their incompatibility with the communities' "unique characteristics".

Mor Buchnik contributed to the report