2 wounded in clash between settlers and Palestinians

Palestinian man reportedly suffered serious injuries after he was shot by settler; another settler was lightly wounded during altercation; army sources: one of volatile scenarios that could lead to deterioration

A week before the Palestinians submit their statehood bid at the United Nations Security Council, tensions on the ground are beginning to rise: In a clash that erupted between Palestinians and settlers in the West Bank Friday morning, a Palestinian man reportedly suffered serious injuries after he was shot by a settler.

Another settler was lightly wounded during the altercation, which took place between the village of Kusra and the Eish Kadosh outpost, after he was stabbed. 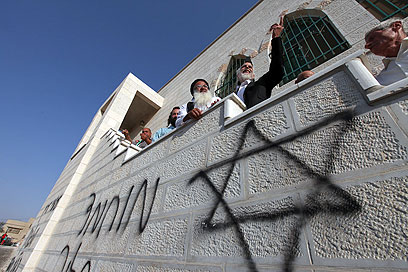 Palestinian sources claim that a group of settlers headed towards the village seeking to confront or attack villagers.

A group of Palestinians, who belong to a security team that was established in the village to defend against settler attacks, stopped a number of them during which the violence broke out.

The Palestinians said that the injured man was evacuated to a hospital in Nablus.

Military sources admitted that the Friday morning clash was one of the dangerous scenarios the defense establishment was preparing for ahead of the Palestinian statehood move at the UN. “We are at the start of a highly volatile period in which any such incident could become a slippery slope leading to a deteriorating situation,” they said.

The village of Kusra was the target of one of the settlers’ price tag operations in retaliation for the razing of a number of structures in the outpost of Migron.

"After the mosque was vandalized, we decided to put together a group of 15-20 residents who will patrol at night and alert (the authorities) if settlers infiltrate the village in order to damage homes or public buildings," Mayor Hani Ismail told Ynet.

Meanwhile, a Kalashnikov assault rifle and ammunition were discovered in an abandoned Palestinian car near the Shvei Ami outpost in Samaria. Police sappers arrived at the scene as IDF units began investigating the incident.