Palestinian envoy in Germany says 'If all European states support us at the General Assembly, we'll drop Security Council bid'

BERLIN – Palestinian Authority envoy in Germany Saleh Abdel-Shafi claimed Sunday that the Palestinians will drop their bid to achieve full UN membership in exchange for European Union recognition of the PA as a UN observer state at the General Assembly.

"We are still negotiating with the Europeans," Abdel-Shafi told the Financial Times Deutschland. "We'll be willing to forgo the Security Council bid if European states support us at the Assembly vote," he said.

Abdel-Shafi added that his statement does not signify the end of negotiations with Israel, but rather its aim – "saving the two-state solution vision."

The Palestinians now face two options: Turning to the Security Council, the only body authorized to decide on accepting a new state as a full UN member, or addressing the General Assembly, which can declare the PA a non-member observer state.

While the Security Council bid is slated to be met by a US veto, at the General Assembly the Palestinians are sure to win an overwhelming majority. European states are expected to vote independently on the matter. According to press reports, France endorses a unilateral Palestinian declaration of independence while Germany opposes it. 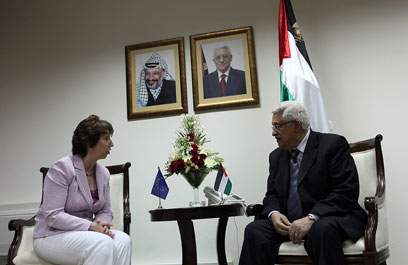 Meanwhile, Norway's foreign minister says the Scandinavian country will back Palestinian officials in their appeal to the UN for statehood.

In a Facebook post late Saturday, Jonas Gahr Stoere wrote "Palestinians have the right to go to the UN" and Norway is "ready to recognize a Palestinian state."

The EU fears a split in the votes of the 27 member states. EU foreign policy chief Catherine Ashton visited the Middle East this week but the EU has yet to announce which way it will vote.

"The next days are crucial," spokeswoman Maja Kocijancic said. "It is for Palestinians to decide on next steps but we continue to believe that a constructive solution that can gather as much support as possible and allows for the resumption of negotiations is the best and only way to deliver the peace and two state solution the Palestinian people want."

Envoys from the Quartet of Middle East negotiators will meet on Sunday in a last-ditch push to relaunch Israeli-Palestinian peace talks and avert a showdown over Palestinian statehood at the United Nations, an European Union diplomat said on Saturday.

Elior Levy and AP contributed to this report