Ahmadinejad to dine with NYC students?

WASHINGTON – Iranian President Mahmoud Ahmadinejad is slated to return to the Columbia University campus in New York this week in what is being dubbed "a private dinner with students." Ahmadinejad will be in New York for the United Nations General Assembly.

During his 2007 visit to the campus, the Iranian leader suffered criticism and insult from Columbia President Lee Bollinger.

The current visit is not expected to go over quietly either. A group named United Against Nuclear Iran (UANI) is putting pressure on the university to cancel the event. 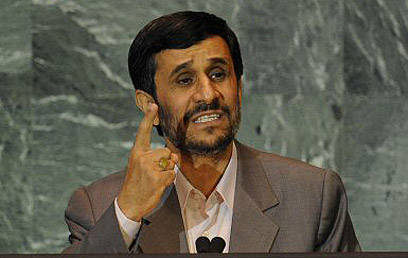 Ahmadinejad. Cool reception? (Photo: AFP)
UANI President and former UN ambassador Mark Wallace wrote to Bollinger that hosting Ahmadinejad insults the residents of New York, adding it was not appropriate for a person in his capacity to meet with a leader who heads a regime that challenges the international community by seeking nuclear weapons, violating human rights and funding terror organizations.

Ahmadinejad is scheduled to speak before the General Assembly on Thursday. He will be staying at the Warwick Hotel on Sixth Avenue, several blocks from the Waldorf Astoria, where US President Barack Obama's delegation will be staying. Prime Minister Benjamin Netanyahu will also be staying nearby.

The Iranian leader's visit to the UN is held in the backdrop of the Palestinian statehood bid and the Libyan conflict, but the UANI wishes to bring the Iranian nuclear program back on the agenda. Activists have posted posters in Times Square and tried to convince NYC hotels not to accommodate Ahmadinejad.

The UANI is basing some of its claims on a New York Post report dating back two years which suggested that US authorities believe that a NY-based organization named The Alavi Foundation is affiliated with Iran. The foundation provides hundreds of thousands of dollars for the research of US professors at the Columbia and Rutgers universities.

Meanwhile, AFP reported last week that Ahmadinejad will bear gifts when he attends the General Assembly, presenting delegates a book on the allied occupation of Iran during World War II, media reported Thursday.

The Iranian leader would take copies of the book, entitled "Documents of Iran's Occupation by the Allies during WWII," to the UN "to present them to delegates as gifts," Ali Shojaee, the manager of publishers Book House, was quoted as saying.

Ahmadinejad would take 1,000 copies of the work containing "a multitude of documents regarding the injustices inflicted by the allies on the Iranian people during the occupation," he said.