The Security Council vote on the Palestinians' request for UN membership is still "several weeks" away, which should give diplomats time to thwart a confrontation, French Minister of Foreign Affairs Alain Juppe said Wednesday.

"It will probably take several weeks (before a vote takes place) and those weeks can be used to develop a strategy," Juppe told reporters in New York. The Palestinians are preparing to present their statehood bid on Friday.

More on the showdown in the UN: 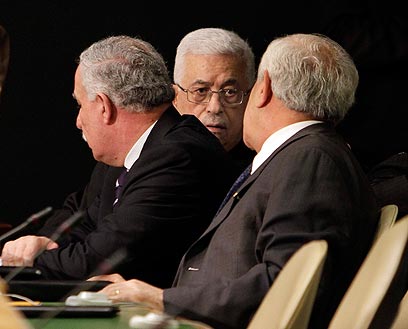 Abbas and the Palestinian delegation at the UN (Photo: AP)

Conflicting comments made earlier by senior Palestinian officials further added to the uncertainty surrounding the PA's UN bid. Nabil Shaath, a senior official in Palestinian President Mahmoud Abbas' Fatah party said, "We will give some time to the Security Council to consider first our full membership request before heading to the General Assembly."

An hour later, Saeb Erekat, a senior aide to Abbas and former chief of negotiations for the Palestinian Authority denied that a delay was on the agenda, saying Abbas has no plans to agree to a delayed vote. "We will not allow any political maneuvering on this issue," he said.

Erekat said Abbas had made that plain in discussions with all parties involved over the last three days of meetings in the lead-up to the annual UN global gathering of presidents, heads of state and ruling royalty.

During his address at the UN General Assembly on Wednesday, US President Barack Obama rejected Palestinian plans to seek UN recognition and urged a return to peace talks with Israel.

However, senior Palestinian officials said Abbas will reiterate to Obama his decision to move forward with the application for membership that will be submitted to the Security Council.

But they also said that the Palestinians seek to cooperate with the US and will be ready to return to the negotiating table once a solid foundation for talks was in place. Israeli Ambassador to the United Nations Ron Prosor told Ynet that non-stop efforts were being made to prevent the Palestinians from submitting their statehood bid to the Security Council.

"So far, we have yet to succeed. We are midway but on the right track," he sai.