NEW YORK – Palestinian President Mahmoud Abbas, in his first interview since arriving in New York for the 66th UN General Assembly, said Thursday that he has no knowledge of a new Israeli proposal meant to propel the stalled Israeli-Palestinian peace process.

In an interview with the Palestinian news agency Maan, Abbas said that while he "met with President Shimon Peres three times and with Defense Minister Ehud Barak twice, he heard "noting new."

"I am convinced that the majority of Israeli people want peace, but the Israeli leadership has done nothing to achieve it so far. On the contrary – it has deliberately thwarted all of the international, Arab and Palestinian efforts," he said. 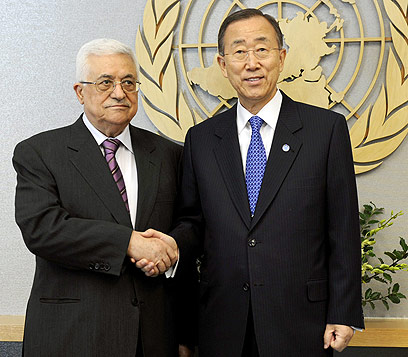 Prime Minister Benjamin Netanyahu is expected to address the General Assembly on Friday afternoon ahead of Abbas' unilateral bid for UN membership.

Thursday saw various world leaders address the UNGA and speak of urgent matters on the global agenda – and the stalled Israeli-Palestinian peace process and looming Palestinian bid were at the top of the list. Israel has mounted a diplomatic blitz in New York in an effort to thwart the bid, and US President Barack Obama informed Abbas that if he insists on submitting it to the UN Security Council the US will use its veto power in the UNSC to quash the bid.

All eyes, it seems, are on Netanyahu. Ynet has learned that the prime minister's speech will feature three key elements: The need for strict security arrangements vis-à-vis the Palestinians, Israel's efforts to achieve peace with the PA and its willingness to hold direct negotiations, and the Palestinians' "defiant and obstinate behavior" which translates into their refusal to negotiate.

Jerusalem sources dismissed French President Nicolas Sarkozy's recent proposal for the UN to give the Palestinians observer status on the condition that the Road Map for peace be implemented within one year's time, saying it was neither viable, nor coordinated with the US or European Union.

Sources privy to Netanyahu's schedule in New York told Ynet that during his meeting with UN officials, including UN Secretary-General Ban Ki-moon, the prime minister learned that even they are having trouble figuring out the exact procedure the Palestinian bid would be subjected to in the UN, and that various legal issues prevent them from knowing exactly when the bid would be voted on.

Jerusalem believes the situation may lend itself to yet another attempt to resume Israeli-Palestinian peace talks.

Senior Palestinian sources told Ynet that despite the UN's own ambiguity as to the procedures, Abbas will not pull the bid from the UNSC agenda. The Palestinians are still struggling to achieve widespread support in the UNSC, which will mostly embarrass the US and force it to veto the bid.

As for the Quartet's effort to broker a compromise that would keep Abbas from appealing to the UN Security Council, Jerusalem sources said that Israel has taken steps to facilitate such a comprise, but the Palestinians "are making up excuses and trying to avoid negotiations."

Meanwhile, US Ambassador to the United Nations Susan Rice said that the UN Security Council is likely to start debating the Palestinian bid for membership as early as next week.

According to a CNN report, Rice said that the Palestinians know that the US will veto the bid.