Joshua Fattal, 29, one of two American hikers released from Iranian jail after two years, is son of an Israeli citizen. US, Israeli media kept silent so as to not endanger his life

Joshua Fattal, 29, one of the two American hikers released from an Iranian prison last week, is the son of an Israeli citizen and has visited the country many times over the years.

After spending 781 days behind bars in Iran, Fattal and his friend Shane Bauer returned to the United States on Sunday.

Fattal's father, Jacob, was born in Iraq and immigrated to Israel, only to move to the United States later on. His son has visited Israel numerous times over the years, including a short trip prior to his and Bauer's hiking trip. 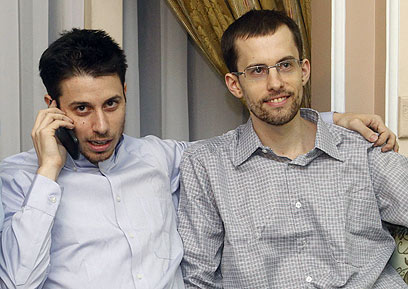 The two were joined by another American, Sarah Shourd, and began their journey in Syria, traveling across to the Iranian-Iraqi border where they were arrested for suspected espionage.

Safe on US soil, the two hikers spoke for the first time in public about their ordeal. Bauer was himself beaten and Fattal forced down a flight of stairs, Shourd told reporters.

"Solitary confinement was the worst experience of all of our lives," Fattal said. "We lived in a world of lies and false hope.

"Many times, too many times, we heard the screams of other prisoners being beaten and there was nothing we could do to help them."

Shourd was released last year after paying $500,000 bail, but the two men were forced to spend more than two years at the hands of the Iranians. They eventually paid $1 million for their release.

"It's the best gift we could have received for the (Jewish) New Year," Fattal's father told Yedioth Ahronoth.

His aunt, who lives in Israel, said: "We've prayed for his safety for the past two years. We went crazy. We talked to him and were able to notice he was very thin. He promised to come visit Israel, but now he's going to undergo a rehabilitation process."

The ordeal also ended well as Bauer and Shourd announced they became engaged while still in prison.

According to the Jewish Exponent, a weekly newspaper in the US, US and Israeli media were aware of the Jewish aspect of the story but chose to keep it under wraps so at to not hinder release efforts.