International pressure was mounting on Israel over its plans permit construction of 1,100 new homes in an east Jerusalem's Gilo neighborhood.

The Turkish Ministry of Foreign Affairs (MFA) issued a statement Thursday criticizing Israel's decision, saying: "Israel's decision raises serious suspicions about its sincerity and true intentions. This is a flagrant violation of international law and is not acceptable," said the MFA.

In the official statement Ankara claimed that "Israel's continued construction of illegal settlements in Palestinian lands shows once more that the Palestinian demand to be recognized as a state at the United Nations is justified and timely." 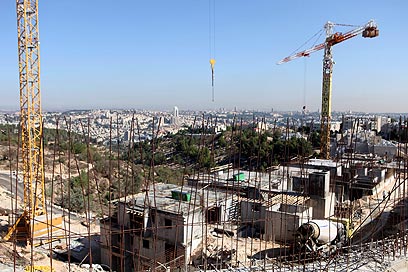 At the very heart of Jerusalem. Gilo (Photo: EPA)

Turkey, which strongly supports the Palestinian statehood bid, also urged the international community to do the same in the announcement.

"Gilo is not a settlement nor an outpost. It is a neighborhood in the very heart of Jerusalem about five minutes from the centre of town," Netanyahu's spokesman Mark Regev said.

The United States, Europe and Arab states said the announcement would complicate efforts to renew peace talks and defuse a crisis over a Palestinian statehood bid at the United Nations.

Britain and EU called on Netanyahu to reverse the decision, and US Secretary of State Hillary Clinton said new settlement building would be "counterproductive".

"Such an Israeli step reflects the country's intention to continue with its provocative policy and defiance of the international consensus regarding the illegitimacy of settlement activities," he said.

Russia too, called on Israel to reconsider.

"We are particularly concerned that decisions on such a sensitive matter should be taken at an extremely important time for the future of the peace process," the Russian foreign ministry said in a statement.

"We are counting (on Israel) so that the construction projects in east Jerusalem are reviewed."

Meanwhile, Palestinian president Mahmud Abbas met Wednesday with members of the central committee of his Fatah movement to discuss the Quartet's proposal and the UN move.

He is expected to meet the executive committee of the Palestine Liberation Organisation over the same issues on Thursday.