Supporters of President Bashar Assad cast eggs, tomatoes at US ambassador to Syria, then try to storm building in Damascus

Thursday as he entered an office for a meeting with a leading opposition figure and then tried to storm the building in the capital Damascus, the opposition activist said.

Ambassador Robert Ford, an outspoken critic of Assad's crackdown on the 6-month-old anti-government uprising, was trapped in the office for about three hours until Syria security forces showed up and escorted him out. 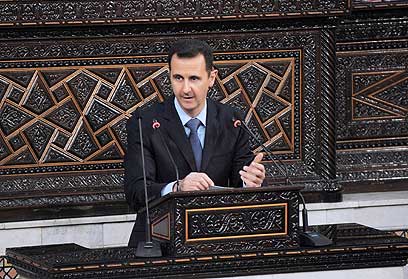 Ford came under attack as he arrived for a meeting with Hassan Abdul-Azim, who heads the outlawed Arab Socialist Democratic Union party.

"Now that security forces are here, I believe his life is not in danger," Abdul-Azim told The Associated Press.

Damascus in a show of solidarity with the anti-government uprising. The latest incident could further raise tensions between Washington and Damascus, which has accused the United States of helping incite violence in Syria. In August, President Barack Obama demanded Assad resign, saying he had lost his legitimacy as a ruler.

Abdul-Azim said Ford was inside his office when the Assad supporters tried to force their way in, breaking some door locks. Office staff prevented them from rushing in, but the ambassador was trapped inside for about three hours with some 100 hostile pro-government protesters outside.

Abdul-Azim said Syrian security arrived about an hour after the attack began.

The US Embassy had no immediate comment on the confrontation.

The attack on Ford came five days after government supporters threw eggs and stones at France's ambassador as he left a meeting in Damascus with a Greek Orthodox patriarch. Ambassador Eric Chevallier was unharmed.

Tension between the West and Syria - Iran's closest Arab ally - have been rising for months.

Washington and the European Union have imposed sanctions on some Syrian officials, including Assad, because of Assad's crackdown that has left some 2,700 people, according to the United Nations.

A trip in July by the US and French ambassadors to the central city of Hama to express support for protesters drew swift condemnation from the Syrian government, which said the unauthorized visits were proof that Washington was inciting violence in the Arab nation. Authorities then warned both ambassadors not to travel outside the capital without permission.

A month later, the Obama administration brushed off a complaint by Syrian authorities that Ford violated their travel rules by leaving Damascus without permission. The Syrian foreign ministry registered concern over Ford's trip in August from Damascus to the southern village of Jassem, where he met opposition activists.

Last month, Ford and several other ambassadors expressed their condolences to the family of a rights advocate who was killed.

The US has maintained diplomatic relations with Syria even while protesting Assad's efforts to crush the uprising.