It has been five years since gave his controversial lectio about Islam at the German University of Regensburg. On September 12th, 2006, Joseph Ratzinger claimed that the god of the Muslims is both transcendental and unreasonable and he severely condemned jihad and the use of violence in the name of Koran. It was the only public event in which a Pope told the truth about some aspects of Islamic religion.

Benedict XVI made himself a central player in the post-9/11 era: His speech against the link between religion and violence, typical of Islam today, was not a mistake or a false step, as some observers wrote at that time. It was, rather, a vigorous attack against certain aspects of Islamic fanaticism.

The reaction to the Pope’s speech was a familiar spectacle: Threats, riots, and violence. From the religious leaders in Muslim majority countries to the New York Times, all demanded the Pope’s apologies. In the Palestinian areas, churches were attacked and Christians targeted. In the Somali capital, Mogadishu, an Italian nun was executed. In Iraq, Amer Iskander, a Syrian Orthodox priest, was beheaded and his arms mutilated.

In Islamic forums, Ratzinger was depicted like Dracula. He received many death threats: “Slaughter him”, “pig servant of the cross”, “odious evil”, “Allah curse him”, “vampire who sucks blood” and so on. The highest Islamic representative in Turkey, Ali Bardakoglu, declared that Ratzinger’s speech was “full of enmity and hatred.” The Egyptian Muslim Brotherhood pledged “reactions worst of those against the Danish cartoons”. 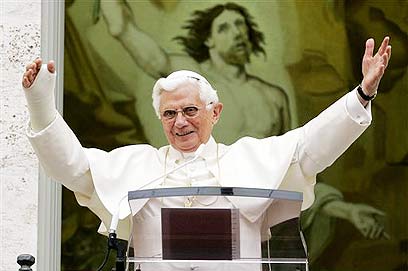 Pope Benedict XVI (Photo: AP)
Iran’s Supreme Ayatollah, Ali Khamenei, accused the Pope of being part of “the conspiracy of the Crusaders.” Under pressure, and aiming to stop any further violence, the Pope apologized. Benedict XVI recently visited again his native Germany, but this time with a different agenda. Five years later, the Vatican adopted a pro-Islam course and has capitulated to fundamentalists. In a recent book written by German journalist Peter Sewald, Pope Ratzinger expressed “regrets” about the Regensburg lecture. The Vatican’s Secretary of State, Tarcisio Bertone, buried the Pope's lesson about Islam as “an archaeological relic.” “The default positions vis-à-vis militant Islam are now unhappily reminiscent of Vatican diplomacy’s default positions vis-à-vis communism during the last 25 years of the Cold War,” writes George Weigel, a leading US writer about the Vatican. The Vatican’s new agenda seeks “to reach political accommodations with Islamic states and foreswear forceful public condemnation of Islamist and jihadist ideology.”

After Regensburg, the Vatican adopted an appeasement agenda. Cardinal Jean-Louis Tauran, who is known for having a pro-Islam position, was appointed by the Pope as the head of the Pontifical Council for Interreligious Dialogue.

In June, the Vatican sent Archbishop Edmond Farhat, who is the official representative of Vatican politics, to Tehran to attend an “international conference on the global campaign against terrorism.” Last autumn, Vatican representatives met with Muslim leaders from around the world in Tehran for “a three-day interreligious dialogue.” In Tehran Cardinal Tauran praised Iran’s “spirit of cordiality” and “the friendly Ahmadinejad.” Last month, the Vatican published a letter written by Tauran, addressing his “Dear Muslim friends.” In the letter, Tauran asked for Islamic help to form an alliance against atheism.

In 2008, the Vatican promoted “Love of God, Love of Neighbor,” the first three-day forum with Islamic leaders. The Pope agreed to meet one the most dangerous Islamist in the Western world, the grandson of Muslim Brotherhood founder Hassan al-Banna, Tariq Ramadan - the Swiss scholar who denies Israel’s right to life and who has been banned from entering the US because of his alleged association with extremists. 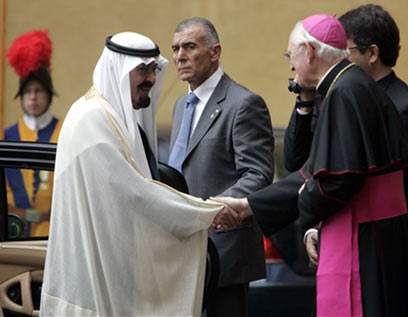 Pope meets Saudi King Abdullah (Photo: AP)
Last May, Bishop Mariano Crociata, secretary general of the Italian Episcopal Conference, announced that the Vatican is in favor of building new mosques in Europe. A month later the European Bishops met with European Muslims in Turin (Cardinal Tauran was also present) to proclaim the need for the “progressive enculturation of Islam in Europe.” In Rimini, a seaside resort on the Adriatic coast, the Comunione e Liberazione movement, one of the most powerful in the Catholic Church, holds its massive annual “meeting” that usually draws some 700,000 people. The Catholic movement last month hosted the president of Al Azhar, the most important Islamic university in Cairo, and a senior leader of the Muslim Brotherhood, despite the fact that for the first time the US Commission on Religious Freedom recommended that Egypt be placed on a list of the “worst of the worst” countries for persecution of Christians.

The State of Israel is easily expendable in the new pro-Islam policy. In January 2009, thousands of Muslims marched in front of Milan’s Duomo to protest against Operation Cast Lead in Gaza. They burned Israeli flags and chanted anti-Jewish slogans. Joaquin Navarro-Valls, John Paul II’s spokesman for 22 years, defended the “freedom of expression” of the Muslims who burned the Star of David.

Months later, Pope Benedict visited Bethlehem, where the Christian population has dropped from a majority to less than 20%. Benedict delivered a message of solidarity to the 1.4 million Palestinians isolated in the Hamas-ruled Gaza Strip. He said nothing of the suffering of Gaza’s 3,000 Christians since Hamas took over that territory in 2007. Benedict could have decried the bombings, shootings and other Islamist attacks against Gaza Christian establishments, the brutal murder of the only Bible-store owner of Gaza, or the regular intimidation and persecution of Christians there. Instead, the Pope stood beside Mahmoud Abbas as the Palestinian leader deceptively pointed to a concrete separation barrier in Bethlehem and blamed that barrier, as well as Israeli “occupation,” for the plight of Christians. A few weeks later, the United Nations ran “Durban II” and on the first day of the conference, Mahmoud Ahmadinejad, the only head of state to attend, made a speech condemning Israel as “totally racist” and referred to the Holocaust as an "ambiguous and dubious question.” When Ahmadinejad began to speak against the Jews, all European Union delegates left the conference room. The Vatican delegation didn’t say a word. To understand the new Vatican’s approach toward Islam, one should also read what happened in the historical synod on the Middle East hosted by the Pope last autumn. Nothing was said about Islamist persecution of Christians; indeed, every effort was made to show the Catholic Church’s sympathy to Muslim grievances, especially against “Zionism” – a word evoked as a symbol of evil. Aside from Iraq, the only country singled out for criticism in the Middle East was Israel. Patriarch Antonios Naguib of the Egyptian Coptic church, who was the “relator,” or secretary, of the synod, expressed “solidarity with the Palestinian people, whose situation today is particularly conducive to the rise of fundamentalism.” The lesson was simple: Islamism is the consequence of Israeli policies. The synod was carefully prepared for a year, and it produced a rash of radical anti-Jewish statements on both political and theological issues.

The rightful concern of the Vatican for co-religionists has also been silenced. Intimidation, thuggery and violence have succeeded in turning away criticism not only of Islam, but of violence committed in the name of Islam against Christians.

Over the past several years, Christians have endured bombings, murders, assassinations, torture, imprisonment and expulsions. The very roots of the Christian heritage in the Middle East are being extirpated. When last winter Christians were killed in Egypt, Cardinal Tauran and the Vatican foreign office requested to “avoid anger” and downplayed the Islamist role in the butchering. In the summer of 2010, Bishop Luigi Padovese, Vatican vicar for Anatolia and president of the Catholic Episcopal conference of Turkey, was slaughtered by Islamic fanatics in Iskenderun on the eve of the Pope’s trip to Cyprus. Vatican diplomacy did its part to convince the Pope to immediately and preemptively rule out the idea that this was a “political or religious” murder. Elsewhere, the number of Christians in Turkey declined from two million to 85,000; in Syria, from half the population they have been reduced to 4%; in Jordan, from 18% to 2%; nearly two-thirds of the 500,000 Christians in Baghdad have fled or been killed; in Lebanon, Christians have dwindled to a sectarian rump, menaced by surging Shiite and Sunni populations, and in Saudi Arabia Christians have been beaten or tortured by religious police. It’s an ethnic cleansing of monumental proportions that makes it clear why the Vatican’s submission to political Islam, along with its religious anti-Israel stance, will be remembered as one of the greatest moral failings of the 21st Century.