Iran criticized Turkey on Tuesday for agreeing to allow NATO to station an early warning radar in the southeast of the country that will serve as part of the alliance's missile defense system.

President Mahmoud Ahmadinejad claimed the defense system was meant to protect Israel against Iranian missile attacks in the event a war breaks out with the Jewish state.

"The missile defense shield is aimed at defending the Zionist regime. They don't want to let our missiles land in the occupied territories (Israel) if one day they take action against us. That's why they put it there," Ahmadinejad said in an address to the nation on state TV late Tuesday. 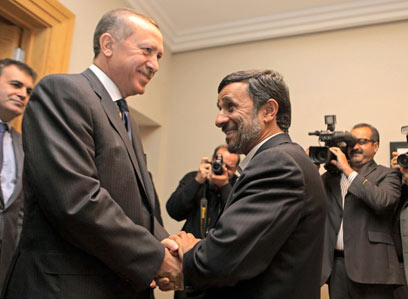 Turkey agreed to host the radar in September as part of NATO's missile defense system aimed at countering ballistic missile threats from neighboring Iran. Ankara claims the shield doesn't target a specific country and had threatened to block the deal if Iran was explicitly named as a threat.

A military installation in Kurecik has been designated as the radar site, according to Turkish government officials. Kurecik in Malatya province lies some 700 kilometers (435 miles) west of the Iranian border.

In September, Pentagon spokesman Col. Dave Lapan said the United States hopes to have the radar deployed there by the end of the year.

"We told our Turkish friends that it was not a correct job (decision) they did and that it's to their detriment," he said. "Such shields can't prevent the collapse of the Zionist regime."

Improving ties with US?

The deployment in Turkey, the biggest Muslim voice in NATO, signals improving ties with Washington since the 2003 Iraq invasion. Turkey also closely works with US forces in NATO operations in Afghanistan and Libya, though it is not directly involved in combat.

Last month, Turkey confirmed talks with the US for possible deployment of Predator drones on its soil after the US leaves Iraq. The US currently shares drone surveillance data with Turkey to aid its fight against Kurdish rebels who have bases in Iraq. Turkish authorities did not specify if they want armed drones or just surveillance ones.

Turkey has built close economic ties with Iran and has been at odds with the United States on its stance toward Iran's nuclear program, arguing for a diplomatic solution to the standoff instead of sanctions.

But the agreement over the radar facility comes at a time when Turkey and Iran appear to be differing on their approach toward Syria, with Turkey becoming increasingly critical of Iranian ally Syria's brutal suppression of anti-regime protests.