Gilad Shalit - soon to be freed?

'Waiting with apprehension for Gilad'

Aviva and Noam Shalit, the parents of kidnapped soldier Gilad Shalit, met Wednesday with President Shimon Peres at his Jerusalem residence where they were joined by Yoel Shalit and his girlfriend Ya'ara Winkler.

"You walked a tightrope and handled the struggle for the return of Gilad with restraint, dignity and determination," Peres said to the family. He also praised Prime Minister Benjamin Netanyahu for showing "leadership and responsibility in making a daring decision".

Peres also addressed the opposition to releasing the security prisoners. "I'm aware of the pain felt by families who have lost loved ones to acts of terror, we must embrace them."

Peres sent his thanks to the Egyptian government that assisted in formalizing the agreement and the German government for its efforts to have Shalit released. He then turned to Noam Shalit and said: "I know you prefer to come to the point, I have tried to follow your path and be concise."

Noam Shalit then spoke: "We have waited many days, weeks and years for this moment and are now waiting with apprehension for the moment we will finally see Gilad, something we have been prevented from doing. I hope he will be able to get back to his life, recuperate and come home."

Shalit joined Peres in thanking Netanyahu as well as the French government and President Nikolas Sarkozy. "We demanded that the Israeli government do its duty by the soldier it sent. That is a supreme value and the fulfillment of the values we were raised on: Mutual commitment and comradeship," Shalit added. 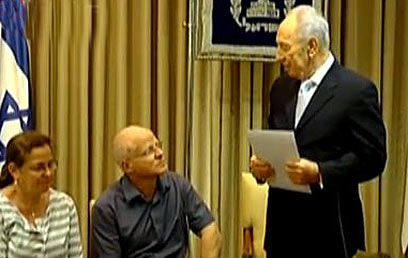 Peres praised the Shalit family for their "forbearance, disposition and exceptional wisdom" he shared how impressed he was with the massive enlistment to Shalit's cause. To which Shalit responded with: "The nation will never again accept that a soldier sent by the state is not brought back."

Aviva Shalit also spoke at the meeting, mentioning her son's comrades in arms, Lieutenant Hanan Barak and Staff Sergeant Favel Slotzker who were killed during the abduction, Aviva said that they will always be remembered like all the bereaved families, some of which are protesting the release of their loved ones murderers. She thanked "all the citizens and supporters who accompanied us with love and warmth."

Earlier, Gilad's brother Yoel Shalit also spoke out about his brother's expected release: "We hope this is our last holiday without Gilad," he said, adding: "We are very excited; soon we will pack a few things and go.

"We hope Gilad will be ready for getting re-acclimated in Israel. We have not had a chance to be together as a family in our home at Mitzpe Hila since his kidnapping and we are looking forward to those moments."

Getting ready for homecoming

Peres is set to meet with the deal's negotiating team and will be handed a copy of the prisoner list. On Saturday night the president is expected to receive the relevant legal information in order to prepare the pardons necessary for the completion of the deal. "This is a symbolic day of happiness blended with sorrow. The government succeeded after five years and 1,935 long nights in bringing Gilad home," Noam Shalit, Gilad's father told reporters shortly after the vote's results were announced.

The deal will see Israel release 1,027 security prisoners, including hundreds who were directly involved in murderous terror attacks that claimed hundreds of Israeli lives, but the deal will still exclude top Hamas prisoners Israel deemed too dangerous to release. Ecstatic celebrations broke out at the Shalit protest tent in Jerusalem when the cabinet's decision was made public.

Zvi Shalit, Gilad's granfather, refrained from expressing any premature joy over the approval of the prisoner exchange deal which is set to bring his grandson home and said that he was waiting to see him and embrace him before he can address the deal as an accomplished fact.

Shalit's grandfather discussed the conversation he had with Prime Minister Netanyahu: "We didn't go into the details of the deal, he didn't tell me exactly who would be released but he did tell me that the deal was signed and that Gilad was coming home. He gave me up-to-date information on the points relevant to my grandson," he added. An Israeli Air Force jet is expected to pick Shalit up in Cairo where he will be received by defense establishment representatives. Members of the IDF medical corps will then examine him. It is believed that he is in good physical condition and will not need to be hospitalized upon his return.

His family is expected to see him for the first time when he lands at the air force airbase.

Shalit will most likely be accompanied by a defense establishment psychologist and will undergo an intelligence debriefing. IDF preparations for what they see as a "mega media event" will include the involvement of the IDF spokesman and the military police.

As for a possible timetable for the execution of the deal, Shalit stressed that he had no details. "I know more or less what everyone knows, that he will be transferred to Egypt after the release of some of the prisoners."

Ahiya Raved and Maor Buchnik contributed to this report