After more than a year in the protest tent in Jerusalem, the Shalit family on Wednesday evening returned to their home in Mitzpe Hila, in order to prepare for their son's return after five years in Hamas captivity.

Noam Shalit, Gilad's father, refused to speak with reporters, and only said: "We are happy to come home and we will be happier when Gilad returns home.

List of prisoners to be published by Sunday
Shin Bet chief: Shalit deal - best possible 'We hope it's last holiday without Gilad'

"The circle will be closed only after he comes down the stairs of the house, just as he did when he left to join his unit on the Gaza border almost five and a half years ago," he said. The head of the campaign for the release of Gilad Shalit, Shimshon Libman, said: "It's hard for me to speak because my eyes are moist. To come here and see all these people and the family, is just an amazing sight.

"Five years have gone by, even more. But that's it. Enough," he said. 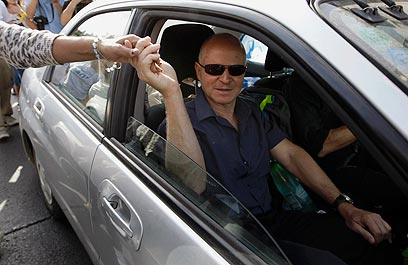 Excited neighbors and friends welcomed the family at the entrance to the community, which was decorated with signs and flags.

'Not the same boy'

Still, before heading home, Gilad's mother, Aviva, remained cautious: "This joy is mixed with a great deal of fear; it is obvious that he won't be the same boy we sent off."

Speaking of Gilad's state of mind she said: "We will deal and help him in every way we can. There are professionals in the field and the State of Israel is excellent in that regard and I'm sure that they will make themselves available if needed. No matter what we do when we get home, the most important thing is that Gilad comes back." Gilad's father Noam Shalit noted that the protest tent had fulfilled its purpose "it will be 'switching careers' and becoming a Sukkah'" standing beside Chief Rabbi Yona Metzger he added that "the chief rabbi and the chief rabbi of France are the tent's last guests."

Earlier Wednesday the Shalit family was welcomed at President Shimon Peres' official residence. Peres told them: "You walked a tightrope and handled the struggle for the return of Gilad with restraint, dignity and determination,"

Peres said to the family. He also praised Prime Minister Benjamin Netanyahu for showing "leadership and responsibility in making a daring decision".