Gilad Shalit - back home, and in uniform
Photo: IDF

Some 100 Palestinians hurled rocks and clashed with IDF troops near the Ofer Base. The Palestinians were angered by the decision to release the Palestinian prisoners in Ramallah rather than through the Beitunia crossing.

The IDF responded with crowd dispersal methods. No one was hurt in the clashes and shortly after the IDF reported that the prisoner transfer had been completed.

Over 1,500 Palestinians waiting by the Beitunia crossing started rioting on the Palestinian side of the barrier where the released prisoners' convoy was supposed to pass through. The rioters waved Hamas flags, set fire to tires and attacked the barrier fence.

In Ramallah, released prisoners were taken to the grave of Palestinian leader Yasser Arafat. Palestinian President Mahmoud Abbas greeted them, and several thousand people filled the courtyard outside his headquarters to celebrate. 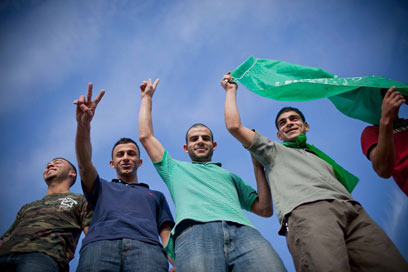 Abbas and Hassan Youssef, a senior member of the Hamas group, both delivered speeches in a rare show of national unity.

"Your sacrifice and hard work were not in vein," Abbas told the released prisoners and expressed hopes that the release of Marwan Barghouti, Ahmad Sa'adat and Ibrahim Hamed were not far off.

"We thank God for your return and your safety," Abbas said. "You are freedom fighters and holy warriors for the sake of God and the homeland."

Celebrations were also reported in Umm al-Fahm and east Jerusalem – cities where some of the released prisoners are set to be transferred to.

Residents gathered in Issawiya in anticipation of the prisoners' arrival. Palestinian flags were seen inside moving cars. Border Guard forces are maintaining order.

Dozens also gathered in Umm al-Fahm to greet prisoner Muhammad Mahaja. His daughter said: "We are waiting for my father patiently and with concern. I missed him very much and I'm waiting to hold him and touch him. This is a historic day for us, we shall never forget it. "