Would-be bomber tells Gaza kids to be like her

Female terrorist released in Shalit swap encourages Gaza children to take up terror, expresses hope some of them will become martyrs; Wafa a-Biss detained in 2005 en route to exploding in Israeli hospital

A would-be Palestinian suicide bomber freed by Israel in the prisoner swap for soldier Gilad Shalit told cheering schoolchildren in the Gaza Strip the day after her release on Wednesday she hoped they would follow her example.

"I hope you will walk the same path we took and God willing, we will see some of you as martyrs," Wafa al-Biss told dozens of children who came to her home in the northern Gaza Strip.

Biss was travelling to Beersheba's Soroka hospital for medical treatment in 2005 when Israeli soldiers at the Erez border crossing noticed she was walking strangely. They found 10 kgs (22 lbs) of explosives had been sewn into her underwear.

A member of al-Aqsa Martyrs Brigades, an offshoot of President Mahmoud Abbas' Fatah party, Biss was sentenced to a 12-year term for planning to blow herself up. 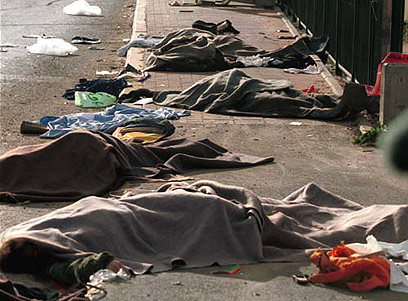 Biss said she had planned to blow herself up at the checkpoint but her detonator malfunctioned.

"Unfortunately, the button did not work at the last minute before I was to be martyred," Biss told Reuters.

She said she had not yet adjusted to her freedom and arose early on Wednesday for prison roll call.

"This morning I woke up in my room, wore my scarf and stood up awaiting the line-up time before I realized I was home and not in jail," she said.

Once she settles back to her routine, Biss said she plans to complete university psychology studies but added that she remained defiant in the face of Israeli warnings to act against those who return to militancy.

"We will pursue our struggle and (Israeli Prime Minister Benjamin Netanyahu) knows that. Arrests will not deter us from our strong battles and confrontation in the face of Zionist arrogance in the land of Palestine," she said.

Biss was one of 477 Palestinians freed by Israel on Tuesday in the first stage of an exchange with Gaza's Hamas Islamist rulers that ended Shalit's five years of captivity. Another 550 Palestinians will be freed in the second stage later this year.