Mashaal to prisoners: You will return to Palestine

As hundreds of thousands gathered Tuesday in Gaza and the West Bank city of Ramallah to celebrate the homecoming of Palestinian prisoners, Hamas Politburo Chief Khaled Mashaal praised his group's 'accomplishment' in keeping Gilad Shalit's whereabouts a secret for the past five years.

At the Cairo airport's reception hall, Mashaal addressed the Palestinians inmates exiled to Egypt, telling them that "hiding Shalit for the past five years was Gaza is a huge accomplishment."

He rejected any Israeli claims that Hamas retreated and became more flexible with its demands. Mashaal said that it was Netanyahu's government which finally compromised.

"The Egyptian mediator got a much better deal compared to the one achieved by the German mediator two years ago. Netanyahu is misleading his people by claiming he got the best possible deal," stated Mashaal. 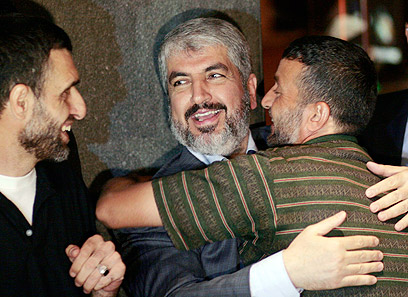 Mashaal told 40 Palestinian prisoners banished from Gaza and the West Bank at Israel's demand, that their "expulsion from Palestine is a crime but it's an exceptional moment and you will return to Palestine," he vowed. "Negotiations based on force are what coerced Israel to pay the price."

He further stated that "the lesson from the prisoner exchange deal also concerns the political aspect – one also needs powerful bargaining chips in these talks. One doesn't sit at the negotiations table without the right cards, or else it's doomed to fail. Our enemy only understands this language." The Hamas official discussed the harsh criticism directed at his group, which allegedly only cared to free its members from Israeli prison at the expense of the other factions' inmates. Mashaal mentioned that many Hamas officials are still behind bars, including Abdallah Barghouti and Ibrahim Hamed. He added that the swap should be considered a national achievement for all of the Palestinian factions; saying that "the Palestinian security minds beat the Israeli security minds, which are supported by advanced technology. "

'Left so many prisoners behind'

Over 250,000 Palestinians gathered in the city's main square, where a formal reception is being held in the honor of the 296 prisoners who were allowed to return to the Strip.

Yahia Sanwar, one of the top Hamas prisoners allowed back into Gaza told the masses: "We feel like we left our hearts behind. We left so many prisoners behind… This is a great victory for our people and for the resistance.

"This is the first time a deal of this magnitude has taken place. We will not abandon our prisoners to bleed in (Israeli) jails. I urge the leaders of all the resistance's factions and the Izz al-Din al-Qassam Brigades to take it upon themselves and free all of the prisoners soon."