Turkish soldiers, air force bombers and helicopter gunships launched an incursion into northern Iraq on Wednesday, hours after Kurdish rebels killed 24 soldiers and wounded 18 in attacks along the border.

Prime Minister Recep Tayyip Erdogan canceled a visit to Kazakhstan and held a nationally televised news conference to announce that Turkey had launched the "hot pursuit" operation, wording that officials often use to describe cross-border offensives in northern Iraq. 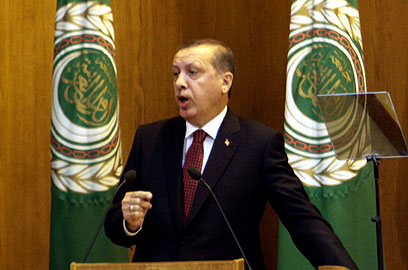 "We will never bow to any attack from inside or outside Turkey," he said.

Turkey's chief of the military and the interior and defense ministers rushed to the border area to oversee the anti-rebel attacks, and the United States and NATO both issued statements supporting the offensive, the largest in more than three years.

NTV television said Turkish troops have gone some 2.5 miles (4 kilometers) into Iraq and that helicopters were ferrying commandos across the border. Dogan news agency said more than 20 Kurdish rebels were killed in ensuing clashes, but did not provide a breakdown. Neither report identified its sources.

Wednesday's offensive began hours after the rebels, who are fighting for autonomy in Turkey's southeast, staged simultaneous attacks on military outposts and police stations near the border towns of Cukurca and Yuksekova.

The Interior Ministry first said 26 soldiers were killed and 22 wounded, but Erdogan corrected those figures to 24 dead and 18 wounded, without explaining the discrepancy. It was the deadliest Kurdish rebel attack against Turkey's military since the 1990s. Dogan news agency said about 200 Kurdish rebels were believed to have launched Wednesday's attacks.

Kurdish rebel group the Kurdistan Workers' Party, or PKK, said fighting was taking place in two separate areas close to the mountainous Iraqi-Turkish border. "We have been clashing with the Turkish forces in two areas since around 3 am today," Dostdar Hamo, a spokesman for the rebel group in northern Iraq, told The Associated Press by telephone.

In Baghdad, an Iraqi government spokesman was not immediately available for comment.