Libya's new leaders have promised Muammar Gaddafi will be buried Friday according to Islamic norms, a day after his dramatic final hours when the fugitive dictator was dragged from hiding in a drainage pipe, begging for his life as his hometown and last bastion fell to the revolutionaries.

However on Friday the oil minister of Libya's interim government announced that the burial will be delayed for a few days until arrangements for the location are finalized.

"I told them to keep it in the freezer for a few days... to make sure that everybody knows he is dead," Ali Tarhouni told Reuters. He said the body was in Misrata, which was a stronghold of the rebels who toppled Gaddafi throughout Libya's civil war.

Asked about the burial arrangements, including where he would be buried, he said: "There is no decision yet."

Amid conflicting accounts of how the fugitive former Libyan leader met his end, a doctor who examined his body said Gaddafi was fatally wounded by a bullet in his intestines following his capture.

"Gaddafi was arrested while he was alive but he was killed later. There was a bullet and that was the primary reason for his death, it penetrated his gut," doctor Ibrahim Tika told Al Arabiya television. "Then there was another bullet in the head that went in and out of his head."

The death, two months after Gaddafi's ouster, finished off the nearly 42-year regime that had turned the oil-rich country into an international pariah and his own personal fiefdom. It also thrusts Libya into a new age in which its transitional leaders must overcome deep divisions and rebuild nearly all its institutions from scratch to achieve dreams of democracy.

The governing National Transitional Council said interim leader Mustafa Abdul-Jalil will formally declare liberation on Saturday in the eastern city of Benghazi, where the revolution against Gaddafi's rule began in mid-February. The NTC has always said it will form a new interim government within a month of liberation and will hold elections within eight months.

Acting Prime Minister Mahmoud Jibril, who confirmed Gaddafi's death on Thursday, said he will step down to make way for others to guide the oil-rich North African nation toward democracy.

Meanwhile, NATO's governing body is set tol meet on Friday to decide when and how to end the seven-month bombing campaign over Libya. Officials said they expected the operation to end very soon, but the alliance may decide to keep air patrols flying over the Libya for several more days until security stabilizes.

'A revolutionary and martyr'

While foreign governments from Britain to China hailed a new day for Libya following Gaddafi's death and called on the new government to move swiftly to rebuild a shattered economy and restore order amid chaotic celebrations, some were less delighted by the news.

"They murdered him," Chavez told reporters, adding that "we will remember (Gaddafi) all our lives as a great fighter, as a revolutionary and as a martyr." 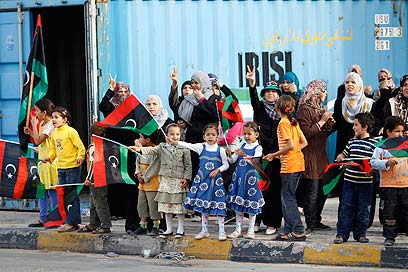 There was also concern about the confusion over how Gaddafi died, with some leaders and human rights groups, including the United Nations Human Right Commission saying he should have been taken alive and calling for an investigation.

Libyan revolutionaries had pledged to bring Gaddafi to court to face atrocity charges, and Arab satellite TV stations have since broadcast a video showing him taken alive by his opponents.

However, some suggested that, on balance, Gaddafi's death might have worked to greater effect than his capture.

Shashank Joshi, an associate fellow at London's Royal United Services Institute, said that while the revolutionaries may have wanted him alive, "a trial would have been an opportunity for him to grandstand. So in some ways, his death is more cathartic."

Reuters and AP contributed to this story