A week after the release of kidnapped Israeli soldier Gilad Shalit, top Saudi cleric Dr. Awad al-Qarni is offering a $100,000 reward to anyone who kidnaps Israeli soldiers.

He is responding to an ad published by the Libman family offering a similar reward for anyone who catches the person who murdered their relative Shlomo Libman. Libman was killed by terrorists near the settlement of Yitzhar in 1998.

"The press reported that the Zionist settlers will pay huge amounts of money to whoever kills the freed Palestinian prisoners," al-Qarni said. "In response to these criminals I declare to the world that any Palestinian who will jail an Israeli soldier and exchange him for prisoners will be rewarded with a $100,000 prize," he wrote on his Facebook page. 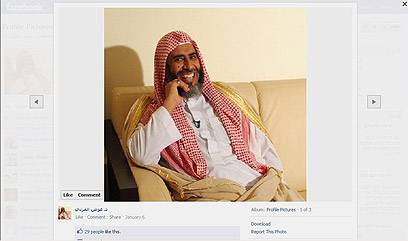 Al-Qarni's post has already received more than 1,000 likes and extensive coverage in Hamas-affiliated newspapers in Gaza.

Al-Qarni is a famous Muslim cleric who often guests on TV shows and operates his own website where he discusses various religious law issues. The Palestine-Islam issue is particularly close to his heart.

Meanwhile in Gaza, Hamas Minister Fathi Hamad admitted that Israel's withdrawal from the Strip enabled Hamas to hide Gilad Shalit for so long.

In an interview with Lebanese daily as-Safir Hamad said that the "military campaign in Gaza abolished any security coordination with Israel and the Strip's liberation allowed us to conceal Shalit for five years."

Hamad stressed that Izz al-Din al-Qassam, Hamas' military wing managed to keep Shalit captive despite Israeli attempts to extract him and admitted that they paid a heavy price for keeping Shalit captive.

"That is why the deal is a triumph for the Palestinian people and residents of Gaza who have sacrificed 600 lives during Israel's first response to the bold abduction."