As Israel prepares to send first shipment of aid to earthquake hit Turkey, former diplomats claim this is not opportunity to promote diplomatic relations in light of recent crisis, stress this should not be attempt to 'cash in' politically

Former ambassadors to Turkey reacted Tuesday to Ankara's request for aid from Israel following the devestating earthquake that hit Turkey's eastern region, saying: "Like the Carmel fire disaster, we must not develop diplomatic expectations". As Israel prepares to send aid to the disaster-stricken area, Israeli diplomats who have previously served in Ankara are suggesting that the public distinguish between humanitarian gestures and the diplomatic crisis. "Today's situation between the two countries is much worse than what it was during the Carmel disaster," they noted.

Alon Liel, former Director General of the Foreign Ministry and former Charge D'affairs in Turkey in the 80s said that from the moment the news of Turkey's request for mobile structures was published, he has been inundated with calls from companies and people interested in helping and contributing.

"I've even been asked if the Turks would mind if there are stars of David on the buildings. My suggestion is to show restraint – we're doing this for the Van province, not with one eye on Ankara.

"Offering natural disaster aid is not something that can change the diplomatic state of affairs," he told Ynet. "The Carmel fire disaster did not bring about any diplomatic changes either," Liel noted. "There was a conversation between Netanyahu and Erdogan in an attempt to find a phrasing for an apology, but it didn't work.

"Today the situation is much worse, with the downgrading in diplomatic relations and the expulsion of diplomats. You need to remember that today we're only at second secretary level in Ankara.

"The relationship is in a tough place, with open wounds on daily display – including reports of joint military exercises with Greek Cyprus, that's like waving a red flag to the Turks," Liel added.

According to Liel, the best thing to do at the moment is stick to the humanitarian level, keeping away from pushing the diplomatic buttons. "At the moment they have tens of thousands of people who need housing from tomorrow night, since winter is closing in and the weather there is cold. "The question is also how much will they let us give – at this stage we want to give more than they want to receive, proven by the fact that they have rejected medical aid.

"Even if we help and transfer hundreds of homes that leave an 'impact' we need to let the Turkish public judge our actions. We shouldn't go to the Turkish regime the next morning with an attempt to cash in diplomatically," Liel declared. 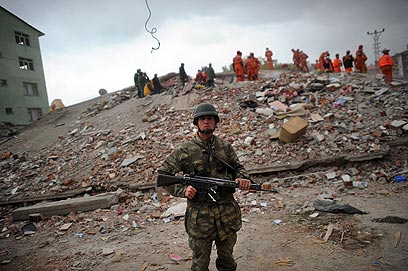 A humanitarian step, not a political one. (Photo: AFP)
Uri Bar-Ner served as Israel's ambassador to Turkey during the massive earthquake of 1999. At the time Israel sent aid and a rescue team to help Turkey. Bar-Ner believes that humanitarian gestures and diplomatic troubles should be separated. "This is, of course, a positive step but it's and it doesn't reflect as such on relations with Israel. I would base this move on the humanitarian issue without placing false diplomatic hopes at this stage," he stressed.

Bar-Ner expressed hopes that the next move would bring about a change in public opinion in Turkey, but made it clear that it was too early to say that the move would restore relations.

He claimed that the chance of improving relations between the two countries hangs on the will of Turkish Prime Minister Erdogan and mentioned that the Turks have their own problems at home and abroad. "I believe that today Erdogan understands that he needs to calm things down with the Kurds first, that is his biggest problem. Then there are the regional problems with Iran and Syria. "It is possible that these problems will lead him to reach a conclusion that he cannot afford to act on all fronts and that his actions towards Israel are not helping him." Meanwhile, diplomatic wrangling aside, a Defense Ministry cargo plane will head to Turkey with the first aid shipment on Wednesday. The Ministry noted that the aid given by Israel to Turkey 12 years ago has been very helpful in the current situation thanks to the experience accumulated by the delegation during its time in Turkey. Yoav Zitun contributed to the report