Calm shattered in south as Grad rocket lands near Ashdod

According to Magen David Adom, several people suffered shock in first rocket attack from Gaza since Shalit release. A Color Red siren was heard in several communities including Ashdod, Kiryat Malachi, Ness Ziona and Rehovot, where a siren was heard for the first time

After weeks of quiet and for the first time since Gilad Shalit has returned home, the quiet has been shattered in southern Israel: A Grad rocket fired from the Gaza Strip on Wednesday night landed in an open territory in the Be'er Tuvia Regional Council between Ashdod and Gedera. According to Magen David Adom, several people suffered shock.

Police forces are currently canvassing the area in order to locate the exact spot where the rocket had landed. A Color Red siren was heard in several communities including Ashdod, Kiryat Malachi, Rehovot, Ness Ziona and Gan Yavne. There is no Iron Dome system deployed in this region. 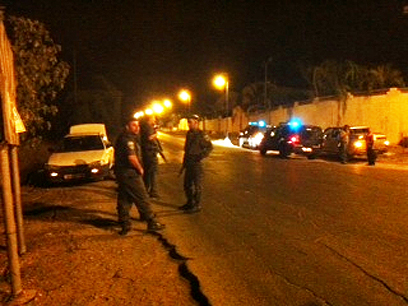 The Grad rocket was most likely fired from the northern Gaza Strip near the ruins of what was once the settlement of Dugit.

"At first we thought it was a false alarm," said Avihai from Ashdod. "We were in the stairwell, waited about two minutes and then returned home after we heard nothing. That's when we heard a boom."

Another woman recalled, "I was watching television with my husband. It took me several seconds to realize it was a siren. I told my husband we must take the kids to the fortified room. We heard a very large explosion that shook the entire house and we realized that it fell in the area."

A siren sounded for the first time in the Coastal Plain city of Rehovot. Daniela, 14, said it was the first time she had heard a siren that was not part of a drill. "I was in the shower. At first I thought it was the sound of the wind but then I realized and came out soaked. I ran to the fortified room. It was really scary. My parents didn't panic but they didn’t realize what was happening. I hope this does doesn’t happen again."

Another resident of Rehovot said, "I heard a strange sound after falling asleep. At first I didn’t know what it was. Who would have believed that the rockets would reach Rehovot. After several seconds we realized it was an alarm, woke up the kids and ran hysterically to the stairwell. It was very scary, the shelter was locked and no one was prepared."

Eran from Rehovot also described the moments of anxiety: "All the neighbors came down to the street and yelled 'where do we go, where do we go'. They wondered why the Home Front Command didn’t tell us what to do. Everybody freaked out. In the middle of life – an alarm."

In the first phase of the prisoner exchange deal that brought Shalit home after 1,941 days in Hamas captivity, over 200 Palestinian terrorists had been released to the Gaza Strip.

Before the deal, several Qassam rockets were fired at southern Israel. At the beginning of the month, a rocket exploded in a field in the Hof Ashkelon  Regional Council. A second rocket landed within the Palestinian territory.