In 'urgent message,' Arab league expresses its 'severe discontent for the continued killing of Syrian civilians'

Arab ministers said on Friday they had sent an urgent message to Syria's President Bashar al-Assad, calling on him to end seven months of violence against civilians following the killing of 40 pro-democracy demonstrators by Syrian forces.


It was the Arab League's strongest message on the relentless crackdown by Syrian forces, who on Friday shot dead at least 40 protesters calling for international protection for Syria's pro-democracy protesters, activists said.

The League's Arab Ministers Committee on the Syrian Crisis said it sent an "urgent message ... to the Syrian government expressing its severe discontent for the continued killing of Syrian civilians." 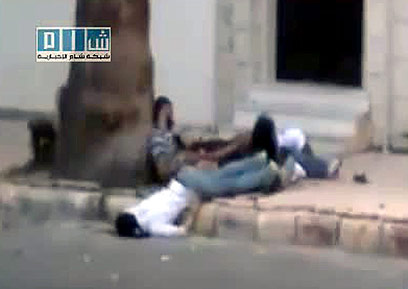 The Committee "expressed the hope that the Syrian government would take action to protect civilians", the statement said. Arab ministers are due to meet Syrian officials on Sunday in the Qatari capital of Doha.

The killings were mainly in the cities of Hama and Homs where men loyal to Assad have raided homes in their efforts to stop protests and a nascent armed insurgency against his autocratic rule.

Following the latest killings, a local rights group the international community to impose a no-fly zone over Syria to protect Syrian civilians and soldiers deserting the army.

"We call on the international community to impose a no-fly zone so that the Syrian Free Army can function with greater freedom," said the Syrian Revolution 2011 on its Facebook page.