At least 11 rockets and mortar shells were fired at southern Israel overnight and early Sunday morning as reports emerged of imminent cease-fire. Most of the projectiles landed in open territory while the Iron Dome system intercepted two Grad rockets fired at Ashdod.

On Saturday, at least 27 rockets were fired at the south. Moshe Ami, 56, a father of four from Ashkelon was killed by a rocket that hit the southern city.

Latest stories on escalation in South:

Beersheba residents woke up at 3:30 am Sunday as an alarm sounded throughout the city followed by sounds of explosions. Two rockets landed in open territory outside the city. Around 4:30 am, a rocket exploded in an open field north of Ashkelon.

Around 6 am, two more rockets were fired at Sha'ar Hanegev Regional Council while another landed in the region of Lehavim and Rahat. 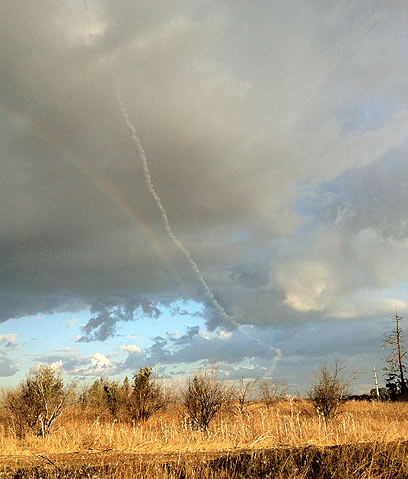 Two operatives belonging to the Al-Quds Brigades, the Islamic Jihad's military wing, were killed overnight in IDF strikes on the Gaza Strip. Palestinian sources reported that Hamas training camps and facilities were bombed as well. Nine Islamic Jihad terrorists were killed by the IDF since Saturday.

Some 200,000 children stayed home from school on Sunday due the tense security situation. Schools were closed in towns within 40 km of the Gaza Strip, including Beersheba, Ashkelon and Kiryat Malachi. Ben Gurion University did not launch the academic year.

Schools in Sderot, and the Sha'ar Hanegev and Eshkol regional councils remained open.