For almost 10 years, the European Union has engaged Iran’s rulers in fruitless diplomatic efforts to halt their nuclear weapons program. Last week, the International Atomic Energy Agency confirmed that the Islamic Republic has conducted tests specific to building nuclear warheads. With the Iranian regime mere months away from having the bomb, the EU is running out of time. Europe’s major leaders, from German Chancellor Angela Merkel to France’s Nicolas Sarkozy, have repeatedly stated their opposition to a nuclear Iran. In her speeches to Israel’s Knesset in 2008 and the US Congress in 2009, she declared that the security of the Jewish state is “non-negotiable” to her administration, and that Iran’s drive toward a nuclear weapon must be stopped.
Going High-Tech
Report: Israel to employ high-tech weapons in Iran strike
Ynet
American intelligence officials tell the Daily Beast Israel assembling multibillion-dollar array of high-tech weapons that would allow it to jam Tehran's defenses in case of pre-emptive strike
Report: Israel to employ high-tech weapons in Iran strike
Sadly, Europe’s leaders have not matched their tough political rhetoric with meaningful political action. In 2010, as the US moved to tighten economic sanctions on Iran, European capitals merely paid lip service, while their bilateral trade with Iran flourished to over 25 billion Euros a year. As European officials surely know, this money helps finance Iran’s illegal nuclear activities.

Last month, US Treasury Undersecretary for Terrorism and Financial Intelligence David S. Cohen took a whirlwind tour of Berlin, Rome, Paris and London, with the goal of persuading major European capitals to sanction the Central Bank of Iran. The CBI is essential to Iran’s international trade, and Europe has shown no desire to clamp down on it. According to this week's Der Spiegel magazine, an unnamed member of the German government rejects a complete boycott of Iran on grounds that it would “unite the entire country against the West.” 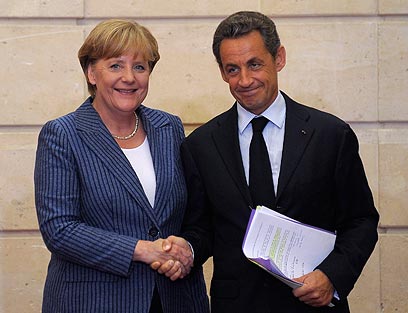 Merkel and Sarkozy - will they take action? (Photo: EPA)

But Iranians are dead-set against their regime, and have been since the fraudulent presidential elections of 2009. The Germans are concerned only with preserving their 4 billion Euros bilateral trade relationship, which makes them Iran’s number one business partner in the EU.

Dr. Matthias Küntzel, an expert on German-Iranian economic relations and a professor at a local college in Hamburg, and a sharp critic of the Merkel administration policy on the Islamic Republic, told me that “Germany should either openly admit that it has resigned itself to living with an Iranian bomb, or do what is necessary to prevent an atomic bomb in the hands of religious fanatics.”

When it comes to sanctioning Iran, Germany has long been the weakest link in the chain. Yet France, Italy and the United Kingdom also refuse to sanction Iran’s Islamic Revolutionary Guard Corps or its central bank. Both entities are deeply immersed in Iran’s nuclear program and finance its terrorist proxies, including Hezbollah in Lebanon and Hamas in the Gaza Strip. George W. Bush's administration sanctioned the IRGC in 2007 as a global terrorist organization.

The IRGC controls as much as 75% of Iran’s economy, including its oil companies. If Europe were to sanction the IRGC, reduce its imports of Iranian crude oil, and then fill the gap with reserves from Kuwait and Saudi Arabia, Iran’s cash flow would soon begin to dry up. For the sake of European security and Middle Eastern stability, Europe should also not rule out military strikes to damage Iran’s nuclear facilities. While British Foreign Secretary William Hague and Dutch Foreign Minister Uri Rosenthal did not explicitly rule out military intervention against Iran at a meeting of EU foreign ministers in Brussels on Monday, German Foreign Minister Guido Westerwelle categorically rejected it. And Germany is the only EU country that claims to see Israel’s security interests as integral to its own. If German officials truly saw their security interests as identical to those of the Jewish state, they would not withhold their assistance in enforcing sanctions on the greatest threat to its existence. The West may still have time to roll back Iran’s nuke program, and Germany has more leverage than any other European nation to do so. Will Merkel make good on her promise?