The scenes of protesters fighting with black-clad police forces numbering in the thousands were reminiscent of the 18-day uprising that forced out longtime President Hosni Mubarak in February. The violence took place just nine days before Egypt's first post-Mubarak parliamentary elections.

Witnesses said the violence began when riot police dismantled a small tent camp set up to commemorate protesters killed in the uprising and attacked around 200 peaceful demonstrators who had camped out in the square overnight in an attempt to restart a long-term sit-in there.

"Violence breeds violence," said Sahar Abdel-Mohsen, an engineer who joined in the protest after a call went out on Twitter urging people to come to Tahrir to defend against the police attacks. "We are tired of this and we are not leaving the square."

Police fired rubber bullets, tear gas and beat protesters with batons, clearing the square and pushing the fighting into surrounding side streets of downtown Cairo.

Abdel-Mohsen said a friend was wounded by a rubber bullet that struck his head and that she saw another protester wounded by a pellet shot in his neck. 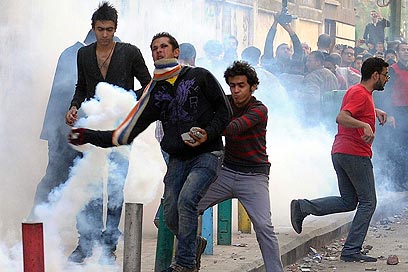 Crowds swarmed an armored police truck, rocking it back and forth and setting it ablaze. Black smoke rose over the crowd.

Saturday's confrontation was one of the few since the uprising to involve police forces, which have largely stayed in the background while the military takes charge of security. There was no military presence in and around the square on Saturday.

"Down with Tantawi," hundreds of protesters cried, referring to the country's military ruler Field Marshal Hussein Tantawi, as they lobbed rocks and whatever they could towards policemen who responded with heavy volleys of rubber bullets.

The official MENA news agency reported that police moved into Tahrir Square in the morning to disperse the demonstrators. Clashes continued unabated through the afternoon and demonstrators seized a police truck.

One of the protesters, Ali Abdel Aziz, said security forces beat up protesters to break up the morning sit-in: "They beat us harshly, they didn't care for either men or women. The interior ministry must take responsibility. We have one demand, the military council must go," said the 32-year-old accountancy professor.

The military council, which had been in charge since Mubarak's resignation on February 11, says it will hand over power after a yet unscheduled presidential election. Parliamentary polls are to start on November 28.