Field Marshal Tantawi asks Kamal Ganzouri to lead 'national salvation' government, but move may stir up opposition over demand to sever all ties to Mubarak regime

Ganzouli confirmed he had agreed in principle to lead a "national salvation" government after meeting with the head of the ruling army council, Field Marshal Mohamed Hussein Tantawi, Al-Ahram cited sources close to Ganzouli as saying.

Ganzouli served as prime minister from 1996 to 1999 and carried out a number of financial reforms. While many Egyptians regard Ganzouli as an honest politician, the fact that he had served under deposed President Hosni Mubarak may stir up opposition from those who demand that the new government be free of any ties to the old regime. 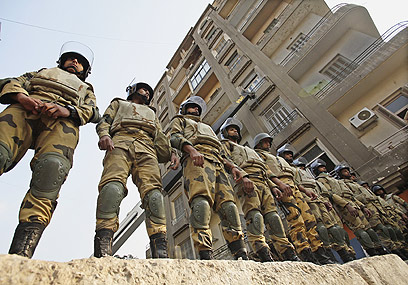 Major General Mukhtar El Mallah, a member of the ruling military council, said Thursday he hoped a new government would be in place before the election, due to start on November 28, which the military has said it won’t postpone.

However, the generals do not plan to step down and transfer all powers to a civilian government, as demanded by the tens of thousands of protesters who have been gathering in Cairo's Tahrir Square.

Egyptian protesters and police observed a truce on Thursday after clashes that killed 39 people in five days, but activists said they would intensify pressure for an end to army rule with a mass rally on Friday.