The storming of the British embassy compound in Tehran provides extra ammunition to European governments pushing for stronger sanctions against Iran, in particular a contentious embargo on Iranian oil, diplomats said on Wednesday.

EU foreign ministers will meet in Brussels on Thursday to map out Europe's response to the recent International Atomic Energy Agency report that suggested Iran has worked on designing an atom bomb.

Much has already been agreed on – the EU will add some 180 names to a list of people and entities targeted by pan-European sanctions – but a number of EU capitals have yet to decide exactly how much economic pressure the EU should apply on Iran over its nuclear program, which it insists is peaceful.

Tuesday's attack on the British embassy by dozens of students and protesters angry over Britain's unilateral sanctions could go some way towards convincing them stronger action is needed, diplomats said.

"From a political point of view this (attack) cannot, I think, work in the direction of EU member states wanting to ease pressure on Iran," one senior EU diplomat said. "On the contrary."

"The whole question is do we go further and add a new set of sanctions apart from those adopted in the past." 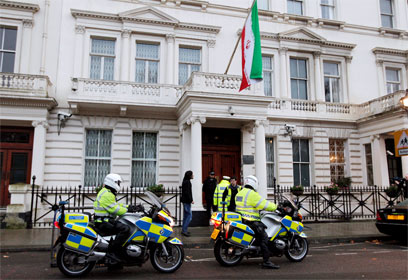 French Foreign Ministry spokesman Bernard Valero said that following the embassy attack, Paris would push foreign ministers in Brussels to look at sanctions beyond what had already been agreed, especially proposals made by President Nicolas Sarkozy to freeze the central bank's assets and to ban oil imports.

French sources sais that Paris feels the attack has added to the already long list of factors playing against Tehran and those that have wavered will be more inclined to listen to the French proposals.

Britain plans to back the idea of banning Iranian oil imports to Europe, but resistance elsewhere in the EU remains. In the past week, some EU capitals have insisted it is too early to adopt the embargo and ban European companies from doing business with the central bank, concerned about the economic consequences of tighter restrictions on a big OPEC oil producer. Experts said a European embargo could boost global crude prices at a time when Europe is teetering on the brink of recession and struggling with a mounting debt crisis. Diplomatic sources added that the EU's foreign ministers might not be able to reach an agreement on any oil embargo yet, but discussions could be finalized next week. In addition to discussing sanctions, EU governments are expected to issue a stern warning to Tehran over the attack on Britain's interests, expressing their "outrage," EU officials said, using a word seldom used in diplomat communiqués.

The next step could be a concerted move to recall EU envoys from Tehran in a show of solidarity with London that, combined with sanctions, would be a strong signal to Tehran that Europe is serious about pushing for change, experts say.

Britain has shut down the Iranian Embassy in London and closed its own embassy in Tehran. France, Germany, Italy, Norway and The Netherlands have recalled their envoys to Iran for consultations, following the attack on the British Embassy. Iran warned Wednesday that the UK will suffer "the consequences" of its decision to expel Iranian diplomats stationed in London and called on called other European countries to avoid taking similar measures. "We recommend that other European countries avoid following in Britain's and the Unites States' footsteps," a top Iranian official said. "The parliament approved downgrading the diplomatic relations with Britain but Iran's public is pleased that the British diplomats are no longer in Tehran." Meanwhile, General Martin Dempsey, the chairman of the Joint Chiefs of Staff said Wednesday that he did not know whether Israel would alert the United States ahead of time if it decided to take military action against Iran.

He also acknowledged differences in perspective between the United States and Israel over the best way to handle Iran and its nuclear program.

Dudi Cohen contributed to this report