Iranian envoys and families leave London on chartered plane, expelled by UK over attacks on embassy in Tehran

All Iranian diplomats in London left on a chartered airplane Friday, expelled by the UK government in retaliation for attacks on the British embassy in Tehran.

They left Heathrow Airport in the afternoon, the Foreign Office said, and the roughly two dozen diplomats and their dependents will be welcomed back at Tehran airport, according to Iran's semiofficial Fars News Agency.

'We'll give up nukes if Iran does same'

Iran's relations with Britain have become increasingly strained in recent months, largely due to tensions over Tehran's refusal to halt uranium enrichment – a process that can lead to the development of nuclear weapons.

Images broadcast around the world Tuesday showed demonstrators tearing down British flags and brandishing a looted picture of Queen Elizabeth II at the embassy compound in Tehran. The incident has deepened Iran's isolation and significantly escalated tensions with the West. Britain's ambassador to Iran, Dominick Chilcott – now back in Britain – said the experience had been "frightening."

"We had no idea how it was going to end," he said, describing how the mob trashed rooms, damaged furniture, scrawled graffiti and tore up a portrait of Queen Victoria, as staff took shelter in a secure area of the embassy.

He said seven staff at a separate residential compound that was also attacked were seized and "quite roughly handled" by the invaders.

In response to the attack, British Foreign Secretary William Hague on Wednesday ordered the Iranian diplomats to leave within 48 hours. 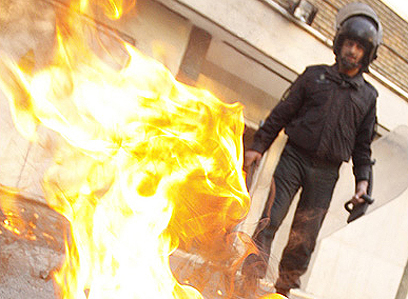 Hague also pulled Britain's diplomats out of Iran following the embassy attack and backed new sanctions on the Islamic republic. At least four other European countries, including Germany and France, also moved to reduce diplomatic contacts with Iran.

Iran's government has criticized the attacks, but hard-liners have spoken out in support of the protesters. Mohammad Mohammadian, a representative of Supreme Leader Ayatollah Ali Khamenei, praised the attackers, saying they had targeted the "epicenter of sedition."

As the deadline for the Iranian diplomats approached, about 20 protesters gathered outside the Iranian embassy in London to demonstrate against the regime in Tehran.

Shouting "terrorists, terrorists, must go," the protesters – many from the London Green Movement which campaigns against Iranian human rights issues – stood in front of flags reading "Free Iran."