Data questions Israel asylum, refugee policies; says only 17 out of 43,000 asylum seekers have been granted refugee status since 2008

"After 16 years in Israel, I am not allowed to work and cannot get medical services," Oscar Olivier, an asylum seeker from Congo, told Ynet. Olivier, like many others asylum seekers in Israel, has filed a request to be recognized as a refugee 12 years ago, and has yet to receive an answer.

Data shows that the Interior Ministry has granted refugee status to only 17 people since 2008, leaving 43,000 asylum seekers without healthcare, work permits, education or any kind of aid. The migrants thus live in conditions of poverty, which inevitably leads to criminality.

"There is no category for them," Orit Marom, a coordinator at Assaf, an advocacy group for refugees and asylum seekers, explained. "As far as the Israeli law goes, they are invisible."

The asylum seekers enter Israel by infiltrating its southern border, and are first held at Ktziot Prison before being released with a visa that protects them from deportation but grants them no other rights, Marom said. A refugee status, on the other hand, would grant them all the rights of a resident except the right to vote, for a period of a year. Those who do file for status are subjected to indefinite waiting periods. Moreover, the infiltrators who hail from Eritrea and Sudan – who make up 88% of such migrants in Israel – aren't given the opportunity to submit an official request for asylum, despite the fact that Israeli government officials have recognized the humanitarian crisis in these countries.

"The regime there does not protect human rights, and anyone who returns there is at risk, including the risk of death," Deputy Foreign Minister Danny Ayalon said recently.

MK Shaul Mofaz, who chairs the Knesset's Foreign Affairs and Defense Committee, addressed the issue during a tour of southern Tel Aviv neighborhoods, where many of the refugees concentrate.

"We must make a supreme effort to stop the waves of infiltrators that are surging from Egypt, but at the same time avoid deserting and neglecting those who live among us," Mofaz said. "Such negligence, beyond being inhumane and immoral, is dangerous."

Women, gays not recognized as refugees 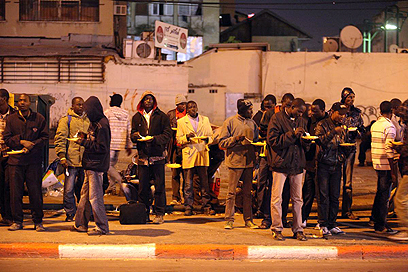 "It's unacceptable that the rates of refugee recognition in most other countries are much higher," he said. "Is it possible that all the liars have arrived in Israel?"

The Immigration and Population Authority justifies the low rates by claiming that many of the asylum request are filed by migrant workers whose visas have expired and wish to extend them by illegal means. But Livnat has a different explanation.

"Unlike the legal interpretation that has been widely accepted in Western nations, Israel intentionally chose to exclude women or individuals who face gender-based prosecution from the convention," he said.

In other words, the State chose an interpretation that deems women and homosexuals ineligible for refugee status in order to limit the number of people to whom it could grant asylum.

"A refugee status is given in accordance with the UN convention for refugees," the Immigration and Population Authority said in response. "The status is granted on an individual basis to those who suffer from prosecution due to their religion, race, nationality, association with a social group or the expression of a political opinion… The great majority of those who filed the request were deemed ineligible."

Shiri Hadar contributed to the report