Haredim rally in Shabbat Square to protest 'media incitement' against them in wake of women's exclusion discourse. Some are wearing yellow patches

Some 350 people gathered in Jerusalem's Shabbat Square on Saturday to protest the "exclusion of haredim." They are protesting what they call "media incitement" against them in the backdrop of a public debate on discrimination against women. Some of the protesters are wearing yellow patches.

Asked why he was wearing a yellow patch, one protester told Ynet it was a gesture symbolizing the secular population's "Nazi behavior" toward the ultra-Orthodox public. Two other protesters, US citizens attending a Mea Shearim yeshiva, said they were attending the demonstration "for fun." Also spotted in the crowd were two children wearing striped pajamas, similar to the uniform worn by concentration camp prisoners during the Holocaust.

Dr. Yitzhak Kadman, director of the National Council for Child Welfare condemned the exploitation of children calling it "a media gimmick."

"This cynical use of children basically says 'let's enhance emotions and put the kids in the front' in places that can be dangerous for them."

He said the use of Holocaust symbols degrades the Holocaust as well as the children. "Children are not a billboard or a flag to be waved. It's not something the child chooses or wants. The adults need to understand that kids are not a weapon or a PR tool." 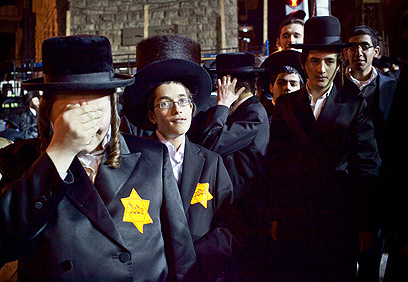 The demonstrators have also rallied to support Shmuel Weisphish, a haredi school principal and member of a Jerusalem "modesty patrol" who will start serving his two-year sentence for bullying clients in an electronics shop on Sunday.

Weispish was first arrested in 2008 for allegedly torching an electronics shop, bullying and vandalism. He was eventually charged with assault and destruction of property in 2009. 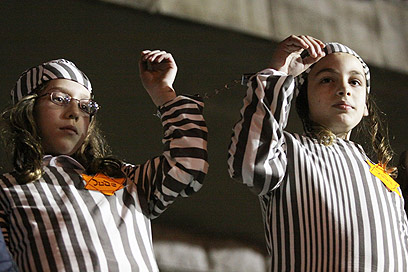 Weispish was also arrested earlier this month in connection to a fraud scheme in the Education Ministry.

He is suspected of bribing two government officials in exchange for registering hundreds of fictitious students in his school, which earned the institution a budget of tens of thousands of shekels.