Food supplies reached residents and bodies of dead protesters recovered, Arab League chief says, but adds 'there is still shooting and yes there are still snipers'

Syria's government has withdrawn heavy weapons from inside cities and freed about 3,500 prisoners but security forces continue to kill protesters even with foreign monitors in the country, the Arab League chief said Monday.

Nabil Elaraby said pro-regime snipers also continue to operate in Syria and he demanded a complete ceasefire. But despite the regime's ongoing crackdown, he listed the achievements of the Arab League monitors since they began work.

The monitors are supposed to verify Syria's compliance with an Arab League plan to stop the nine-month-old crackdown on dissent. President Bashar Assad agreed to the plan on Dec. 19. But since the Arab League monitors began work last Tuesday, activists say government forces have killed more than 150 people, the vast majority of them unarmed, peaceful protesters.

"Yes, there is still shooting and yes there are still snipers," Elaraby told a news conference in Cairo, where the Arab League is based. "Yes, killings continue. The objective is for us to wake up in the morning and hear that no one is killed. The mission's philosophy is to protect civilians, so if one is killed, then our mission is incomplete." "There must be a complete ceasefire," Elaraby said. But he also said tanks and artillery have been pulled out from cities and residential neighborhood, food supplies reached residents and bodies of dead protesters recovered. 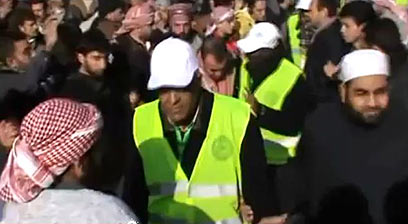 Rami Abdul-Rahman, who heads the British-based activist group Syrian Observatory for Human Rights, confirmed that tanks had withdrawn from Syrian cities. But he said residents reported that the weapons were still a threat.

"They can bring the tanks back and use them to fight," Abdul-Rahman told The Associated Press. Elaraby did not say when the heavy weapons pulled out of cities, but Abdul-Rahman said it was on Thursday. The Arab League plan requires Assad's regime to remove security forces and heavy weapons from city streets, start talks with opposition leaders, free political prisoners and allow human rights workers and journalists into the country. Already, Syrian opposition groups and a pan-Arab group, the Arab Parliament, have been deeply critical of the mission, saying it is simply giving Assad cover for his crackdown. Suggesting that the League did not have a figure for the number of Syrians detained since the uprising began, Elaraby called on the opposition and ordinary Syrians to aid the observers by sending them names of relatives or friends they think are detained by Assad's regime. He did not say whether the League was able to verify the release of 3,484 prisoners or when they left prison. "We call for the release of all of them," he said. Elaraby defended the Sudanese general heading the Arab League mission in Syria, saying he was doing his job perfectly. "He is a capable" military man with a clean reputation." Controversy has swirled around Lt. Gen. Mohamed Ahmed Mustafa al-Dabi because he served in key security positions under Sudanese President Omar al-Bashir, who is wanted on an international arrest warrant for crimes against humanity in Darfur. Amnesty International said al-Dabi led al-Bashir's military intelligence service until August 1995, when he was appointed head of external security. "During the early 1990s, the military intelligence in Sudan was responsible for the arbitrary arrest and detention, enforced disappearance, and torture or other ill-treatment of numerous people in Sudan," it said in a statement. "The Arab League's decision to appoint as the head of the observer mission a Sudanese general on whose watch severe human rights violations were committed in Sudan risks undermining the League's efforts so far and seriously calls into question the mission's credibility," Amnesty said.