In recent days, two dramatic photographs alleged to be depicting Israeli army brutality have gone viral. One, which circulated on Facebook, purportedly showed an Israeli soldier stepping on a Palestinian girl and pointing an AK-47 at her head. It was exposed as Bahraini anti-Israel street theater.

All a Twitter
British media storm: IDF officer 'mocks' protestor's death
Yoav Zitun
UK's Telegraph reports that IDF officer 'mocks' death of Palestinian protestor on Twitter with his use of word 'fail'; IDF says sources with a vested interest focused on isolated tweets rather than entire timeline
British media storm: IDF officer 'mocks' protestor's death
The second, by Agence-France Presse photographer Hazem Bader, was not confined only to the free-for-all Internet. Although it too is of dubious authenticity, it appeared in mainstream news outlets which claim to uphold journalistic codes of conduct. The International Herald Tribune published by the New York Times, attached great importance to the image, prominently displaying it Jan. 26 across four columns with the caption: “A Palestinian construction worker screamed in pain Wednesday after he tried to block an Israeli Army driver who drove a trailer over his legs near Hebron. . . .” The original AFP caption referred to an “injured Palestinian construction worker.” The Washington Post ran the color image across five columns, and several news websites featured Bader’s photo, including the Wall Street Journal, the Guardian and MSNBC.

After checking Palestinian, international and Israeli sources, it seems that the “injured worker,” Mahmoud Abu Qbeita, was, in fact, not actually injured. Moreover, there is no evidence that he was even run over. The Palestinian Center for Human Rights and the United Nations’ Office for the Coordination of Humanitarian Affairs, both of which provide comprehensive reports about all West Bank injuries, made no mention of the alleged injury. 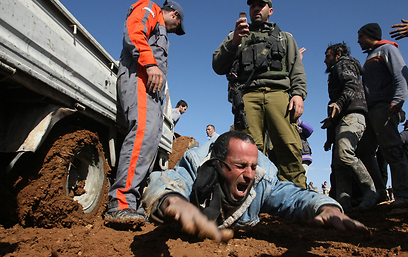 On the Israeli side, spokesman Capt. Barak Raz said soldiers were on site to protect Civilian Administration officials who were confiscating Palestinian construction equipment in an area not permitted for building. Abu Qbeita was on the ground blocking the trailer when he started screaming that he had been run over, although no one saw it happen. Initially, Abu Qbeita complained his left leg was injured. After an army medic’s examination found no wound, Abu Qbeita then claimed his right leg was injured. Raz said that the Palestinian Red Crescent likewise found nothing wrong with him.

Presented with this information, AFP Jerusalem bureau chief Philippe Agret angrily responded that because several media outlets were on the scene, including Palestine TV, Pal Media, and Al Quds TV, Abu Qbeita could not possibly have faked being run over. The AFP also claimed to have viewed footage of Abu Qbeita being carried away on a stretcher, but does not claim to have seen footage of him being run over. Agret unwittingly drew attention to a key point: of the several photographers on site who were snapping away, not one has released a single image of Abu Qbeita as he was being run over.

Where are the x-rays?

Alarmed by what it termed “the ferocity of the attacks against the AFP,” the wire service issued a rare defense of its photo and caption. Remarkably, the Feb. 3 statement was at odds with the Jan. 25 caption on several basic facts. While the caption indicated that the vehicle ran “over his legs,” in plural, the AFP statement quoted Abu Qbeita: “it drove over one of my legs.” Likewise, while the caption said a soldier “drove a trailer hooked to a tractor over his legs,” AFP later quotes Abu Qbeita as saying the much larger tractor hit him.

Similarly, while the caption maintained that Abu Qbeita was run over “as he tried to block” Israeli forces from confiscating the vehicle, Abu Qbeita told AFP later: “I started walking over to where my stuff was so I could get my phone and my ID card and that’s when the tractor hit me.” Which one was it? A tractor or a trailer? One leg or both? AFP swings back and forth on these essential points. The AFP also produces what it calls a “medical certificate” from the Palestinian Ministry of Health dated the day of the incident. Why would the health ministry, and not the hospital itself, release a statement about a patient? The AFP translated the peculiar document as stating: “We conducted X-RAYS on him and found fractures.” The wire service also quotes Abu Qbeita boasting that he has “a medical certificate and I will show it to anyone who wants to see it.” But, tellingly, he does not offer to show the x-rays. Nor has AFP released them. If the x-rays confirm Abu Qbeita has fractures, why conceal them? If AFP cannot produce x-rays upholding Abu Qbeita’s claims, the Tribune, Washington Post, the Wall Street Journal and the other mainstream outlets have a responsibility to retract the photograph. Otherwise, the media giants are no better than the dime-a-dozen anti-Israel activists who ferociously attack Israel with unsubstantiated posts on Facebook and the rest of the Internet without a care in the world.