Netanyahu, who visited an Iron Dome battery, thanked the council heads for their hard work. Addressing the south's residents, he said "Our policy is clear. We will strike anyone who tries to harm (Israeli) civilians. The IDF is dealing very heavy blows.

"We'll bolster the Iron Dome (anti-rocket) system, which is performing very well but does not provide hermetic protection," the PM said. "I believe our combination of offensive and defensive capabilities, coupled with our (civilians') fortitude, is a winning combination." 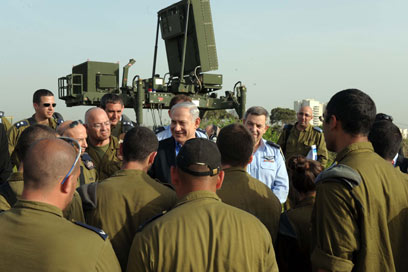 Ashdod Mayor Yehiel Lasri said during the meeting with Netanyahu "we are doing the best we can to contribute to the national resilience. The Iron Dome system provides outstanding protection, but we are aware it is not 100% effective – as witnessed in Beersheba today.

"The fact that we are strong does not mean we accept this situation. A sovereign country cannot allow a situation whereby every few months a million people have to put their lives on hold," the mayor added. "We'll back any decision reached by the prime minister." Earlier, Netanyahu told the weekly cabinet meeting that the army 'is pounding with force. We have exacted a high cost and still do. We shall act as long as necessary." Follow Ynetnews on Facebook and Twitter