Dozens of French Muslims are training with the Taliban in northwestern Pakistan, raising fears of future attacks following the shooting deaths of seven people in southern France by a man who spent time in the region, Pakistani intelligence officials said Saturday.

Authorities are investigating whether Muhammad Merah, the Frenchman of Algerian descent who shot to death three Jewish schoolchildren, a rabbi and three French paratroopers in Toulouse this month, was among the training group, the officials said.

Merah was killed in a dramatic gunfight with police Thursday after a 32-hour standoff at his Toulouse apartment. The 23-year-old former auto body worker traveled twice to Afghanistan in 2010 and to Pakistan in 2011, and said he trained with al Qaeda in the Pakistani militant stronghold of Waziristan.

Approximately 85 Frenchmen have been training with the Pakistani Taliban in the North Waziristan tribal area for the past three years, according to the intelligence officials, who spoke on condition of anonymity because they were not authorized to talk to the media. Most of the men have dual nationality with France and North African countries. 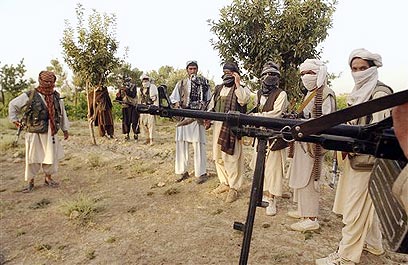 The Frenchmen operate under the name Jihad-e-Islami and are being trained to use explosives and other weapons at camps near the town of Miran Shah and in the Datta Khel area, the officials said. They are led by a French commander who goes by the name Abu Tarek. Five of the men returned to France in January 2011 to find new recruits, according to the officials. It's unclear whether Merah was among that group.

"Anyone who goes abroad to follow ideological courses that lead to terrorism will be criminally punished. The response will be prison," he said in a campaign speech Saturday.

A senior French official close to the investigation into the shootings told The Associated Press on Friday that despite Merah's claims of al Qaeda links, there was no sign he had "trained or been in contact with organized groups or jihadists."

The claim could not be independently verified.

Meanwhile on Saturday, Experts have used cellular tracking technology to determine that a laptop belonging to Abdelkader Merah, the brother of Muhammad Merah, was located near the Jewish school where the latter shot dead four people on Monday. The computer appeared to have been near the scene of the shooting on the day of the attack.

Abdelkader, who has been taken in for questioning in Paris, denied involvement in his brother's shooting spree.

Earlier on Saturday, Merah's brother was flown to Paris for further questioning , along with his girlfriend, but a lawyer for Merah's mother, 55-year-old Zoulhika Aziri, said she had been released without charge.